Gov. Richardson was In Town Tonight

Posted by Dayvoe
Ok, so I was late. I had to work and the earliest I could get to Wholey's was about 20 to 5. But I was late. By the time I arrived Jon Delano and his film crew were packing up to go. Andy Gastmeyer and his crew were already out the door and around the corner. Luckily, Jim O'Toole was still there. He was standing at the door chatting. I asked him for directions to the Pittsburgh Room.

After getting the directions, I walked into the store, between the displays of chilled whole fish, and up one set of stairs, past a table full of big-fish sandwiches, and up a second set of stairs to where Governor Bill Richardson was holding court with a couple dozen twenty-somethings. Pitt Democrats, I later learned. Pitt Dems with a smattering of Pitt Dem Law students.

Great, so I was late and I was at least double the average age in the room. The group, I gotta say, included someone who really really really needed a shower. I couldn't tell who it was, but GEEZ pungent isn't the word. Probably not the best way to meet a guy running for the highest office in the land. But what do I know? The year I graduated college, Ronald Reagan was still President and ABC had just begun broadcasting Moonlighting. 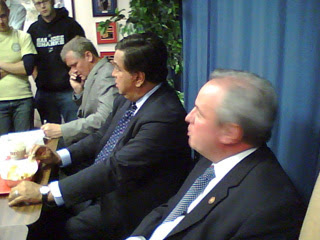 When I walked in, Congressman Mike (did you know they call him "Mad Dog"?) Doyle, Governor Richardson, and Dan Wholey, who's running against Congressman Tim Murphy, sat, chomping on the sandwiches and chatting up the kids.

I caught the tail end of the discussion about FISA and the recent restructuring of the law. "There's no reason not to have judicial review." I heard the Mad Dog Doyle say. Good for him.

Then the conversation turned to war - both present and (possibly) future. Notably Iran. To Richardson, while Iran is a major power in the Middle East, it's President, Mahmoud Ahmadinejad, is not. He's kept, according to Richardson, on a very short leash by the Ayatollahs in power. He pressed the idea of diplomacy with the moderate clerics in Iran.

Addressing the college kids in the room, Richardson ended his talk by pointing out 4 legacies that his older generation was leaving them:

And urged them to keep working to "take our country back."

One-on-one he and I discussed the last night's Democratic debate in New Hampshire, FISA, the war and the moveon.org ad. On last night's debate, he said he felt it was his best performance. He was able to differentiate himself from the rest of the pack, he said, on the war.

He said the FISA compromise was "shameful." The only eavesdropping allowed should be done with a court order, he said. The fact that the Congress let the President off the hook wasn't a good thing either. By the way, Bill Richardson is the one who pointed out that:

something is wrong when the New England Patriots face stiffer penalties for spying on innocent Americans than Dick Cheney and George Bush.

When I asked him what, if everything went his way and he's the one taking the oath of office in late January, 2009, would be the first thing he did in office, he said he'd announce a full withdrawal of the troops from Iraq. He'd proposed a Bosnia-type negotiation setup for a partitioning of the country into three parts with an all muslim peacekeeping force to keep the peace. "No one wants an Iraq civil war." He said.

While he disagreed with the moveon ad, he wouldn't have voted for its censure, he said. He still feels that moveon.org is a good organization and that it's good for the democratic process. They made a mistake, he added, and everyone makes mistakes. The outrage coming from the other side of the political aisle is just the Republicans trying to get some mileage out of the story. They want to focus on anything other than the mess they've made of things. 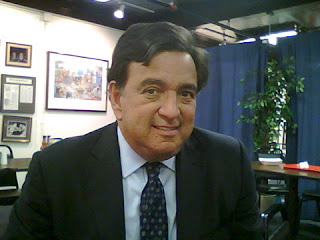