Posted by Maria Lupinacci
You can read the Pittsburgh Post-Gazette's "A guide to decide: Twelve tests to choose between Clinton and Trump" embarrassing non-endorsement here, or you can save some time and just watch this dumpster fire:

According to the editorial in today's paper, the "test" is meant to be "a useful exercise for the citizen’s own decision-making" lovingly curated by...we assume the Block Family (owners of the P-G).

If you're not familiar with the Blocks, here's John Block on Trump's private plane: 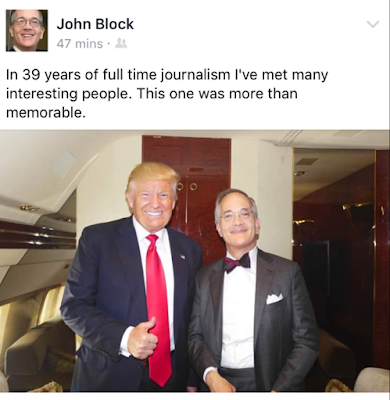 His brother Allan was notably heard in a NYC restaurant loudly voicing his support for Trump, and who "according to FEC filings, donated tens of thousands to Republican political candidates across the country since the late nineties."

There were even reports earlier this year that some P-G journalists were "worried about their paper’s credibility should it support the billionaire candidate who’s campaigned on a platform that includes deporting 11 million undocumented immigrants, building a wall between the United States and Mexico and banning Muslims from entering the country." (Sorry! Mission accomplished!)

So far, the P-G's endorsements have been running a bit heavy on the R side, especially for what was once considered a liberal paper:

Mike Turzai? Doesn't this forever disqualify him from public office?

I assume the editorial board was, oh let's say, grabbed by their metaphorical pussies by the Blocks and had to come up with...something. What they came up with is mostly nonsense and false equivalence that ignores the worst that is Donald Trump. The absolute nadir of the editorial comes in the "Character" portion of the "Leadership Traits."

While acknowledging that Trump is "a vulgarian who never seems to study, to apologize or to learn" and a "sexist and a cad," they feel the need to throw in a bash at Bill Clinton, who is not the one running for office. Moreover, Trump is not just a "cad" (how purposely quaint!), he is according to his own words, a serial sexual predator. And a misogynist, and a racist, and a bigot, and a xenophobe, and a proponent of torturing innocent Muslims. He's a terrible businessman who doesn't pay his vendors, who declared bankruptcy six times, who wrote-off nearly a billion dollars in debt, who refuses to release his taxes because he hasn't paid any federal taxes in decades. He's a man who has a fraud trial starting later this month over his fake "university" and who has hundreds of lawsuits pending against him. He's a man who declared a war hero not a hero because he was captured and who tormented a Gold Star mother. He's a man with questionable ties to Russia's President Vladimir Putin and who doesn't understand why we have nukes if we don't use them.

He is a man who so thin-skinned, he can be provoked by a tweet. Reliably. Repeatedly.

He is a man who has called for his political opponent to be jailed and has alluded to her assassination.

And dozens and dozens of other horrors too many to list -- or even recall at this point.

All this, the P-G ignores.

But it gets worse. Here's what they say about Hillary Clinton's character:


Ms. Clinton would begin her presidential term under criminal investigation. Impeachment is a very real possibility from Day 1. How would she function? Like Richard Nixon, who won in a landslide in 1972, she might not serve out her term. But her dishonesty is more than legal — it is deeply embedded in her every word and gesture. The WikiLeaks provide us many smoking guns, not least of which is this: Nothing about her is genuine.

She is not under criminal investigation.

Impeachment may be "a very real possibility from Day 1" only because the Republican Party, along with their standard-bearer, is determined to turn us into a banana republic.

And her dishonesty? Her dishonesty?!? PolitiFact, the nonpartisan fact-checking outlet, has found that '78 percent of all of Trump's fact-checked claims have been scored "mostly false" or worse.' They also awarded their "2015 Lie of the Year" to the collective campaign misstatements of Donald Trump!

Lastly, the Post-Gazette is on the wrong side of history. 456 newspapers and magazines have endorsed Hillary Clinton. 22 have endorsed Donald Trump (including the KKK’s official newspaper).

Post-Gazette Editorial Board -- you all cisgender, all-but-one white men -- you had a choice to make and you chose instead to make no choice. You chose to cover yourself in shame. You chose to write a dumpster fire of an editorial.

In the immortal word of Donald Trump, "Sad."


UPDATE: From one member of the Editorial Board: 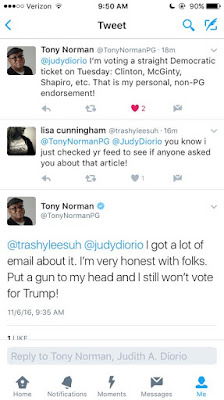 My P-G subscription ends today. I was already planning on not renewing but this made it certain.

I think you will not be alone.