Posted by Maria
Whether they're pulling a Martha Stewart, or conspiring to subvert election laws, or ripping off their kids' school board, or outing a CIA agent, or practicing cronyism turned deadly, or hiring a bagman who in turn hires Mafia hit men, or lying to get us into an unjust war that kills tens of thousands, these guys are: 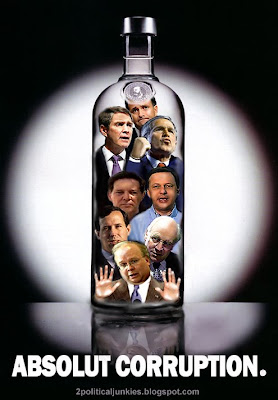 NOTE:
ABSOLUT vodka did not create or contribute to this material,
and has not authorized or approved it.

Crossposted (and a Recommended Diary) at Daily KOS.

Don't let the "genies of corruption" out of the bottle... LOL
I've linked to you with the pic.

unfortunately, america has been hitting that bottle a little too much, they're just waking up from the hangover.

let's hope a little bitter coffee will wake them up

Thanks! I put it up at KOS too and it's on the Recommended List now.

Hey, could I post a copy on my site (ThisCenturySucks.com?

I'm thinking the headline should be "Bush isn't the only GOP big wig hitting the bottle."

I'd link back to you of course.

I hope I didn't boo-boo - I posted your graphic with a link back to both the diary on Daily Kos and to this blog on my blog.

Having that image up adds some class to our humble blog!

who is that at the top? Roberts?

The guy at the top is Jack Abramhoff - GOP bagman.

when does the poster come out?

Nice blog, just came across you today looking for Pittsburgh bloggers. I grew up in the 'burgh, left 15 years ago. For the past few years I've been a DC political blogger. However, lately I've been thinking of moving back to the 'burgh...

Marvelous work! And oh so apt!

Is a woman missing from this bottle? She is always with W, so she should be inside this bottle.

has the suggested revision of substituting the GOP logo for the Absolut seal come out yet? that would be absolut perfection!

This is the Drink of Choice for the Republican Party - I only hope that they mix it with Purple Cool Aid while they are at it.

How about a Democrat bottle?? They are just as bad as Republicans. I see no one helping working people!!

We already had a bottle with Clinton's dick and Monica's dress in it -- it was called an impeachment -- some how that doesn't rise to the level of lying to get us into a war and outing our own CIA agents for me. But, then again, that's just me.

In reality, it's taken the Republicans only 5 years to surpass the corruption that it took the Dems to reach in 40 years (when they controlled most of everything).

I agree that the Democrats need to step up to the plate now.

But I will also remind you that it's the Rethuglicans who are screwing the people the most by trying to dismantle social security, taking away the mortgage deduction, making it harder for folks to declare bankruptcy and giving it all to their rich crony friends and big corporations.

maria - great work. i wonder if you might also design an "absolute impeach" poster as well - you could base it on the "absolute peach" campaign :-)

Hey Maria! Found you through Ratboy's Anvil. LOVE this ad. Since I was a kid I've always been captivated by Absolut ads. This truly completes the circle for me. Thank you, from one Maria to another.

Tommy is right. I could think of a zillion titles for one that features a few key democrats who aren't doing shit to make the situation in this country any better and who only kiss whitehouse ass in order to reach their own agendas just as shamelessly as the right.

It could be Absolut Weasel

Love Rove at the bottom there!

It would be easy to do one on corrupt Democrats and you wouldn't even have to look outside Pittsburgh. So how about one for the locals?

Agree with others who cited corruption isn't party specific. Just give me anyone with a brain, ethics, a valid strategic plan and ability to get things done, I'll vote for them. Don't care which party.

I think you should try go worldwide w/ this add. It would be a success! Here in Brazil for example...we'll need a hole box of those bottles! Think about it...I guess it's a tremendous way for electors to remember not to vote for those inside the bottles! If you need any help, please contact

It's great and catchy but before it spreads, have you safeguarded yourself from lawsuits by Absolute?

Parody has been a standard defense for use of copyrighted images, etc. A good example is "The Wind Done Gone," a retelling of "Gone With the Wind" from the perspective of the slaves. The owners of the copyright to GWTW tried to sue to have TWDG banned, and failed.

You're probably gonna need a lawyer, though. IANAL. If you need help with defense, I suggest you post a message to Pittsburgh Webloggers as well as your site. I bet a lot of people would put in a few bucks to help defend your Constitutional rights.

~8 years of the most corrupt administration ever, in one bottle...I am sure you could have made a six pack of bottled up corruption from teh Bush regime...I suggest getting a lwyer, protect yourself from any legal ramifications over the trademark...and speak to someone in PR, you might be facing the press...~

I've posted a writer's view of the problems with parody and copyrights/trademarks at UnSpace.

Almost immediately after I first posted the article, someone wrote to point out that your parody might have a fatal weakness.

V&S have the right to prevent their trademark from being used in a disparaging way about their vodka. Your parody might cause some clueless people to conclude that Absolut Vodka is the reason for the corruption in the Bush administration. V&S may not want their product associated with these Republicans, especially given the President's history with alcohol and the rumors he has returned to drinking.

I think they may have a point. If you had a product, would you want it associated with Tom DeLay or Rick Santorum? Who wants to drink the vodka that is screwing up the reconstruction of Iraq, making money for Halliburton, and violating Texas law?

BTW: Why was this guy left out?

I wonder if anyone is taking odds on him being pardoned by Bush when Bush leaves office?

Good job to Maria and David for their appearence on the Lynn Cullen show with Tony Norman today. Put up a link to that streaming audio fast cause it only stays on for a week, i will put them up at teutonicjihad.blogspot.com as well