Posted by Dayvoe
An astute (though he only claims to check the blog "from time to time") reader sent me a link to an MSNBC article under the subject heading "correction."

I'm not sure how much of a "correction" it really is, however.

For instance, in the video (about a minute in) Greenspan says some rather intruiging things. Matt Lauer first states that "liberal bloggers" are going nuts over one sentence in the 500 page book and says that those bloggers are saying it's proof that the administration lied. He then asks the former head of the FED of that was fair:

Greenspan: Utterly unfair. I was expressing my view. Saddam Hussein was obviously seeking to get a chokehold on the Straits of Hormuz where about 18 billion barrels a day flow from the Middle East to the Industrial world. Had he been able to get a hold of a nuclear weapon and indeed move through Kuwait and into Saudi Arabia and indeed control the Straits of Hormuz, it would have caused chaos in the international economy.

Lauer then asked if it was just a semantic question, pointing out that "the administration went to war saying it was all about Weapons of Mass Destruction"

It was all for stability of the region - a region full of oil. See? Not much of a correction.

Something, however, doesn't fit with his assessment about Saddam Hussein seeking control of the Straits of Hormuz. Reed Hundt over at TPMCafe pointed it out. First, take a look at a map. It's a little small, but I think it works. See that box in the lower right-hand corner? That's the Straits of Hormuz. See the little teeny tiny grey area in the upper left? Thats where Iraq begins. 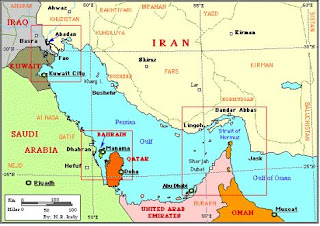 Here's what Hundt had to say about Greenspan's geography:

So Iraq has no port or border on the Strait. Saddam had no naval capability of consequence after the first Gulf War. He had no air force. On the ground, he would have had to fight his way through a legion of enemies to approach the Strait from either side, and plainly would have been crushed. The U.S. Navy is invincible in those waters.

Tell me again how Saddam, hamstrung from the first Gulf War and a decade or so of sanctions would have been able to do it? March through Iran? March through Saudi Arabia?

Wait, wait - I know. He was going to give one of his nuclear weapons to Al-Qaeda and THEY were going to destroy the shipping lanes at the Strait of Hormuz.

Except we all know (and have known for a long time) that there were no nuclear weapons, no WMD, no ties to al-Qaeda.

And so it goes.

maybe he was going to wave his magic wand and destroy anything he chose.

makes as much sense as anything the government has told us about iraq so far.

While I am generally in agreement with what you are saying, David, I do have some concerns about your portrayal of the pre-war military situation in the Gulf. The U.S. Navy is far from "invincible" in any waters, and particularly not in the Persian Gulf. If you don't believe me, ask the survivors of Stark, Samuel B. Roberts, and (although she wasn't exactly in the Gulf) Cole. The Gulf is a tricky and constrained place in which to operate. It's rather shallow for submarines. It's rather narrow to operate carriers (who must be able to maintain course into the wind, often at high speed, to launch and recover aircraft). A great deal of work falls onto the small boy surface warships, and it doesn't take much to threaten those kinds of units.

One doesn't necessarily need a navy, an airforce, or even a coastline to threaten surface shipping. Land-launched anti-ship missiles can do the job, although you are correct in saying that those in the Iragi inventory probably could not reach the Straights themselves from Iragi territory.

But mines are a different story. Many people forget that we had two ships hit by Iraqi mines during the first Gulf War back in 1991. And without going into too much detail, at least one of those attacks came impressively close to causing the loss of the affected warship. But for excellent damage control, it would have.

It doesn't take much to launch a mine. A fairly small craft could do it, especially under cover of darkness.

And one wouldn't necessarily need to mine the straights themselves to have the desired economic impact. Tankers are expensive investments. Oil companies aren't going to take them in harm's way if they can avoid it. A couple of mine hits against civilian hulls would, even in the northern part of the Gulf, would be enough to slow the flow of shipping through the Gulf and therefore (ultimately) through the straights.

Iraq certainly could never pose at big of a threat to shipping as, say, Iran. It is hindered geographically. But it was far from an impotent adversary, and Iraq did have at least some means of slowing or even (temporarily) stopping shipping in the Persian Gulf.

John K. says: Well that explains it. Saddam was shooting at coalition aircraft with what, slingshots? Clinton launched operation Desert Fox to do what? And best of all Saddam was paying families of suicide bombers $25,000 a bomber to blow themselves up along with some Jews. And he had no reach.

John K. says: Oh yah forget. 5th Marine Regt. overran an al queda training camp located in Western Iraq in April 2003. "The March Up" by Bing West. Darn those pesky facts. They get into the way so often it just makes me think like liberal.

5th Marine Regt. overran an al queda training camp located in Western Iraq in April 2003.
Hmmmmm. No link. I wonder why? Let me think. No link. No results on Google. Wait a minute, it's John K. Now I understand.

John K. says: I did provide a link. The question now is, can you read anything besides the Daily Kos. Yah, Hussein shot at Coalition aircraft. That is a fact. Shitrock, come out of yoru shell dude. You have to read stuff besides what George Soros tells you to read.

John K. says: Now this is funny. You Lefties want to get votes to shut down the war in Iraq. You can't get enough votes to allow your fellow Democrats to vote in DC. LOL LOL DC voters rights act failed 57-42. Hello, there aren't 57 Republicans in the Senate. And you think you can demand troop withdrawal. A hearty LMAO along with a mighty HI HO.

The characterization of the US Navy as "invincible" isn't mine - it's Reed Hundt's.

And while I'd of course agree that the Gulf is a very dangerous place (even for the US Navy), any plan outlined by Greenspan seems to me to be lacking in basic geographic literacy.

Which was my point in the posting. How was Saddam supposed to do all (or any) of those things Greenspan described with the military he was left with after the Gulf War and after years of sanctions?

Keep laughing at those dying troops, John. But first, get some help. There is no link. You're hallucinating again.

You should check out the NPR interview with Greenspan where he proudly admits to using a kind of contorted "syntax" to essentially not answer questions he was asked during senate hearings...I'm pretty sure he's using the same kind of "syntax" again when describing his war for oil clarification.

I'm wondering whether Greenspan actually meant the Shatt al-Arab, the same point of confluence of the Tigris and Euphrates that was the spark for the Iran-Iraq War of the 1980s. But that doesn't make sense, as it would only harm Iran, as opposed to the Strait of Hormuz, which would affect everybody in the region.

We are fed so much baseless propaganda about this conflict that we really have to be able to fall back on our own supply of common sense.

For instance, the myth that Saddam is or was out to get us. Ridiculous. Saddam was a dictator, not a religious fanatic. In fact, islamic fanaticism was a huge threat to him. He just wanted to be left alone to do the dictating that dictators seem to so relish.

And that's just one example among so many.