Posted by Maria
According to both the Pittsburgh Post-Gazette and the Pittsburgh Tribune-Review a spot airing on the Pittsburgh Cable TV channel showing footage of Mayor Luke Ravenstahl's inauguration after party had to be edited to remove scenes that some found objectionable.

Fortunately, I taped the program when it originally aired and present still photos of fleeting scenes which do not appear in the now edited segment.

While I cannot claim that Ravenstahl appears in most of the removed offensive footage as the males' faces are partially obscured, I will vouch that the last still shot below (taken in the parking lot outside the party as dawn was breaking) is definitely Mayor Luke as the image of the person depicted can be clearly matched to many of the pictures seen in Ravenstahl's "Mayor Luke Ravenstahl A Pittsburgh Story" campaign brochure.

Here are the deleted scene stills: 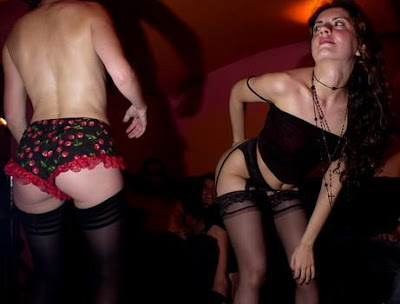 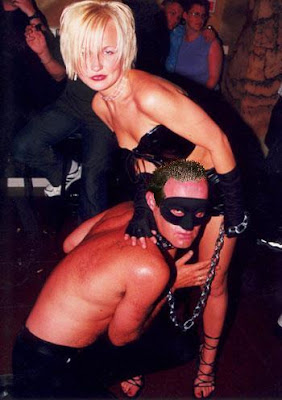 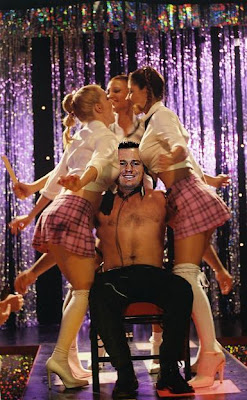 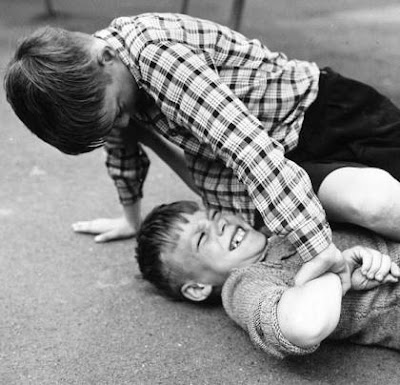 It's all image with the Mayor. Everyone likes Luke, right?

Well, sort of, with public opinion ranging from " I love Luke" to "what other choice do we have?" to "absolutely not" to "he's a weenie of the first order."

Zober and his half baked, inept cronies (Zober being the Chief of Culprits) got the kid believeing in his own propoganda. It has become their reality.

Now, don't get me wrong, propoganda is great and a political device that has been used to good effect for centuries. But to be used effectively, the purvyers of effective media spin/propaganda fully understand the propaganda isn't reality - it's just another story line for public consumption.(See communist Chinese Politboro - "everything is great in our glorious whatever.")

Within the Ravenstahl political braintrust's mind - their propaganda is their reality. Start to believe in your own spin you lose sight of reality. You make misplays like this one. This isn't the first time they made a sows ear out of silk purse.

As a result, Luke's inept brain trust garners yet another bad press day for Luke.

The Inauguration replay on the City Cable Channel, in of itself, is somewhat innocuous in the grand scheme of things. But the Ravenstahl brain trust managed yet again to convert a mild positive to yet another negative Ravenstahl controversy.

Hey Zober, keep tossing those softballs to your opposition. They love you for it.

I'm not saying take it down, Maria, or how dare you or change the way you blog. I'm just giving you my gut reaction. :-(

Well!!!! there, see! Now with that sort of joy-filled night,I don't want to hear one critic when Luke pulls a Clinton/Monica caper. Maybe it could be filmed and posted here too. This is now abolutely acceptable standards in our free society. Thanks Marie. By the way, where do I go to hire those youngsters for an upcoming baptism for my kid?

John K. says: Good thing a left wing kook posted those pictures. If a conservative had done it you kooks might be whining about sexism and bigotry and calling people all sorts of foul names. But a lefty did it so I guess it is okay.

Let's speculate regarding which lion of the conservative den would post such images.

Rush Limbaugh (the life of the Republican Party, because he's the guy with the big bag of unregistered boner pills)?

Sen. Larry Craig (although we all know he was set up by al Qaeda to help the Democrats)?

Ann Coulter (Christian champion of family values when speaking to wingnuts, bleach-blonde spinster fornicator on her own time)?

My guess? Sen. David Vitter. The obvious choice. Hard-line "family values" man who cheats on his wife with a whore when not preaching his "Christ of Hate" gospel, lies about it for years, is caught lying about it, "admits" it to try to save his political bacon, then is shown to have lied about the extent of his adultery in his "admission."

Right-wing "sanctity of marriage" family values in a nutshell, that is. I don't think that posting a few mildly naughty images would be so far out of character for Sen. Vitter.

Thanks for suggesting such a fun topic, John.

Gee, looks like Luke is partying like he's president of a fraternity, not mayor of a city... *sigh*

I don't love the post or anything but it's not offensive at all.

Okay maybe H is right. I take back offensive.

I wouldn't say it is offensive. My imagination is forever scarred by the image of Luke in red cherry underwear and chaps ... ick.

Why must the yinzer moments come from Manchester? Why? Who the hell is Gloria Sheffield and why is someone with the same name as a street where we vote (that would be Sheffield Street) doing on our committee? That just seems odd.

To All: You know the funny thing is, the guy in the mask is really not Luke...I mean it's not even his photoshopped face....Granted, I did give him Luke's hair.

To Bram: Well, a joke is even less funny when you try to explain it, BUT usually when you hear that a TV show has to be edited it's for sexual content, nudity, offensive language, etc. Also, sometimes I feel like what's the use of talking about one more ethical misstep when the public obviously doesn't care -- unless maybe if it were something like what's in the pics.

Oh well, still cracks me up. (Admittedly sometimes it's only me that I crack up!)

Eh ok, I see the joke. As Matt H said, I don't love it. If you're wondering why I'm being so vocal on these types of things, blame Chris Potter.

After the general election, when I was defending the Burghosphere from real and imagined slurs against us from without, he suggested to me that if I'd spent half as much energy preventing the Burghosphere from seeming so mean and nasty from WITHIN, DeSantis would have done better. So that's why I'm going around criticizing commenters and even posters if in my gut I feel they've gone over the line. It's actually quite fun and I recommend it to anybody.