Posted by Dayvoe
Tony Norman's column today is about this: 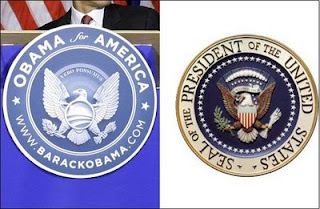 Tony's column begins with this:

Some of my grumpier Republican friends are in a lather over the Obama campaign's hubris of late. Its tweaking of the official presidential seal was unveiled at a meeting of Democratic governors in Chicago last week.

I think we can all agree that we need presidential candidates that are serious enough not to play make-believe on the campaign trail.

It's laughable, ridiculous, preposterous and revealing all at the same time.

Remember those quotes - I wanna get back to them.

Via crooksandliars, I found this steaming pile of truth at the Weekly Standard. They're claiming it's illegal.

Since when are conservatives concerned about campaign illegalities? McCain's over his spending limit with nary a peep from these guardians of our public safety.

Whatever - so it's illegal to copy the presidential seal? Ok fine. Tell that to the Republicans

Take a look at what this blog found.

The Seal of the Republican Presidential Task Force:

I mean, illegal IS illegal, right?

By the way, Obama has dropped his use of the seal. Will the Republicans follow suit and stop their illegal seal activities?

now dave, you should know by now that it's okay if THEY do it.... not so much if the dems do.

Glad he stopped using it. I don't know if it was hubris, but it was, IMO, dumb and unnecessary. I don't like saying, "well, they do it, too." That's never an excuse.

Also, I believe the then WWF - now WWE - had a belt with a large eagle on it that resembled the one on the presidential seal.

Which of course begs the questions "Are you questioning the Hulkster's patriotism, brother?!?"

Tit for tat never works. Personal responsbility and recogntion of individual choices is what matters. It was a bad choice on Obamas part. He changed. and rememberng that the "only constatnt is change", we should roll with it minute by minute.

John K: Seal's down. Obama should learn to respect the US. After all he and you say they support the troops. LMAO again at how easy it is. Is this guy ever going to learn to salute the troops?

Well, the seal thing was silly for Obama, and is silly for the Republicans.

Perhaps you can refrain from lol'ing.

wtf does this stupid campaign seal mishap have to do with the baselass allegation that obama doesn't salute the troops???

John K: This seal is an axample of what I have been telling you about this guy. He hates America and wants it completely made over. Most liberals defend this because they also detest America and want it made over in their image. This seal is insulting. As for the troops. The same thing. Say you support something in words and then make it over in practice. Obama and the left got caught. LMAO and it wasn't all that hard. LOL

you are a made up joke. i know it.

no one is that big of a jackass.

John K.: Did I read this right in the PG: Obama to discuss economics at CMU. LMAO OH man is that funny. Obama thinks money is made so he can spend them on all his social programs. LOL LOL That headline is funny.

This isn't the smartest move I've seen the Obama campaign make. No big deal, in the end, but it shows me that someone at the top of the campaign isn't paying as close attention to this stuff as they should.

Quite aside from whether it's illegal or not, I'm not following why it was "wrong" or a "bad choice". What's the foul here? Is this a First Commandment issue that I'm not aware of? Is the allegation that he was trying to con people into thinking that he is already President?

The American flag is also a revered symbol of our country. Is it wrong for candidates to use red stripes, blue fields, and white stars? If I drop a quarter on the ground, should I kiss it and throw salt over my shoulder?

I know I shouldn't cast aspersions, but some conservatives out there are getting really weird.

You haven't seen anything yet. Wait until november.

Well, John K., it would actually be nice if Americans got something for their tax dollars instead of bailouts for multi-billion dollar corporations, two wars and handouts to the wealthiest Americans.

Why is it that Republicans and conservatives are always telling the American people what they can't do with their government?

For simpletons like John K. loving America means you just have to say you love America more than other people, while you let the country crumble and decay and fall behind(lowest birth weight in 40 years, barely above Mexico in literacy, most expensive health care in the industrial world, an antiquated infrastructure).

I seriously doubt that the 'Obama seal' is illegal. Especially since the only part of it that resembles the Presidential Seal is the bird, which isn't even an exact duplicate.
Thank goodness whomever designed it (Obama's) had the head facing away from the arrows.

As to fuss about the seal...I think it's pretty obvious some people have an awful lot of free time on their hands.

Who cares? If it offends someone, that person needs to get a grip!

Personally, I didn't care for it. It was too "busy." But it's intent is nothing new to Presidential campaigns, which are constantly making an effort to present their candidate as more "presidential" in ways both direct and less so.

I suppose we could classify it as a "logo" misstep, in which case, even with this very minor dust-up, Obama is clearly ahead of John McCain, who changes logos with the same frequency Republicans are caught in bizarre sex scandals(ie, often).

Considering that, I would actually find greater significance in McCain's last logo make-over than Obama's melding of the Presidential Seal with his own. While Obama's campaign was making a not-so-direct correlation with Obama and the Presidency to engender a non-verbal cue to suggest the idea of Obama being "presidential," McCain's last do-over indicated that he was not only willing to conflate his candidacy with Obama's(going so far as to borrow O's logo, if slightly amended) but an acknowledgement that Obama had essentially set the theme of the campaign: change.

By going with "A leader we can believe in"('hardly believe' would be more accurate) McCain made a far graver mistake than anything that Obama will suffer as a result of "seal"-gate. He's surrendered his "experience" argument. He'll still trot it out, but McCain never should have tried to co-opt Obama's message. He's now in the position of arguing how 25 years in DC have made him the candidate of change. That's not an easy sell.

It is also an indicator of just which party is in a better position to win at this point. If Republicans really thought this was going to be a good year, McCain and elected officials like Sen. Gordon Smith(OR) wouldn't be running as Democrats on some issues.

"Why is it that Republicans and conservatives are always telling the American people what they can't do with their government?

Blame that pesky Constitution for putting limits on the federal government and for making the US a democratic republic instead of a direct democracy.

Anyhow, Republicans are just as bad. Both parties trample on the Constitution; they just differ on which parts. Real change and leadership we can believe in would require an end of the two-party system.

Speaking of which, I find it odd (and revealing) that liberal Democrats champion societal diversity and conservative Republicans champion free market competition, but both groups use their power to make sure other parties have only minor influence, if any.

(Sorry for straying off topic.)

both groups use their power to make sure other parties have only minor influence, if any.

It's true, but you can trace this sort of behavior all the way back to Jefferson.

BTW, Eric, your diversion is far more interesting and germaine than the original.