Posted by Maria
When KDKA's Jon Delano interviewed presumptive Republican presidential nominee John McCain this week he "recounted how he would recite the Pittsburgh Steelers defensive line-up to his North Vietnamese captors."

McCain, the Republican candidate for president, says he naturally thinks of the football team whenever he thinks of Pittsburgh.

"The Steelers really made a huge impression on me -- particularly in their early years."

In fact, McCain explains how the team helped him during his time in a POW camp.

"When I was first interrogated and really had to give some information because of the physical pressures that were on me, I named the starting lineup -- defensive line -- of the Pittsburgh Steelers as my squadron-mates!"

Only one problem with that: in the past (and in his book and in a made-for-TV movie), McCain's always claimed that it was the Green Bay Packers lineup -- not the Steelers -- that he named to his captors.

Countdown made it their first story last night:


2 Political Junkies has learned exclusively that this seeming pander to the Steeler Nation was to be only the opening salvo of a multi-pronged campaign to win over the crucial swing state of Pennsylvania.

A remake of the McCain "My Christmas Story" ad was set to run in Western PA. In the new ad, instead of his captor drawing a cross in the sand, 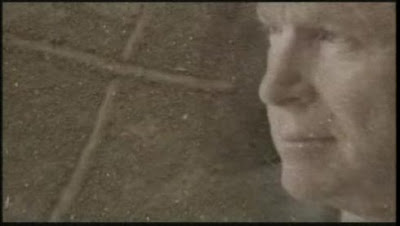 he drew this symbol:

(A Philadelphia-themed ad had an image of a cheesesteak sandwich sketched in the dirt.)

Reportedly, the campaign was to culminate with McCain naming Pittsburgh Steeler mascot Steely McBeam as his running mate. (After numerous rounds of focus groups nationwide, it was found that the frightening, soul-stealing, universally-hated McBeam was the only one able to make McCain appear in comparison "upbeat and friendly" to so called low information voters.) 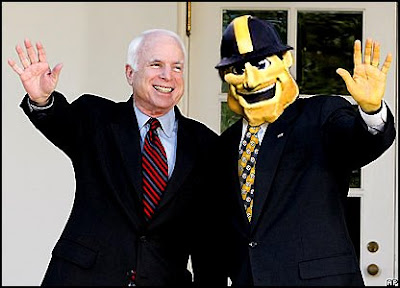 John K: I thought he misspoke. At least he didn't get hit by sniper fire in Bosnia and had to run for his life. LOL LOL LOL LMAO One thing for sure, McCain knows how many States we have. Obama is still trying to garner votes from 57 of those States. LMAO

McCain was captured before Joe Greene was drafted, unless I have my chronology wrong. The Steelers were laughingstocks for the thirty years immediately preceeding the moment at which McCain lost contact with NFL updates, which means he'd have been as likely, while imprisoned, to have recounted the defensive line of the Tampa Bay Bucs as he would have been to have memorized the Steelers' defensive line.

The Bucs, of course, joined the league after McCain returned from captivity.

You are correct, infinonymous. The Steelers Defensive line didn't become the Steel Curtain of legend until '74, a year after McCain was released. Clearly, McCain thinks the people of Pittsburgh are stupid.

What seems more likely? He lied to the people of Pittsburgh, contradicting the statements made in his book about using the Packers offensive line, and decided to make a pathetic pander. Or that he just happened to misspeak by referencing the name of the football team of the city he happened to be in?

McCain is simply the most pitiful Presidential candidate of the modern era. No wonder 54% of his supporters are not enthusiastic about his candidacy.

John K: Uh Jaywillie, 54% of McCain supporters, ie me and my friends, are not enthusiastic about a McCain candidancy because he doesn't support conservative beliefs. He cannot be trusted to champion conservative philosophy in government. Jaywillie, you really need to get out more and mingle with real people. Stop watching all the Stars Wars stuff. lMAO at jaywillie tring to figure out why the right doesn't jump and down for McCain. WRONG as usual. LOL

Um, yeah, I don't disagree with you, John K. But many Republicans will also tell you that they are discouraged by his neverending gaffes, as well as not regarding him as a "tried and true" conservative. At least that's what many of the ones in my golf league tell me, that's what I've read in numerous articles written by conservatives, that's what many Republicans I know from my time working in county politics as a Dem. comm. person tell me(and I still know many of the Republicans who serve on my county's committee, though I'm not as involved any more)...

But, I mean, you have talked to your friends, so...I guess that covers all conservative opinion??? Who can argue with anecdotal evidence?

What any of this has to do with Star Wars, I don't know. I actually don't like the Star Wars movies.

Keep swingin' a way, pal. You might hit something one of these days!

John K: Conservatives are as critical of McCain as the left is. What Jaywillie still is in denial over is this Democrat congress is a conservative congress that Pelosi and Reid have no control over. If they did the funding the war would have been cut, etc etc. Jaywillie, get over your fascination with Princess Leia and hang up the Hans Solo costume and mingle with conservatives.

Um, John, we're not talking about the Democratic Congress...so I don't see where I've denied anything or even broached the subject. Try to stay on topic...

And I actually agreed with you that conservatives are critical of McCain...so, I'm not really sure what you're getting at. You just kind of ramble and make irrelevant comments.

I guess the Star Wars comments are supposed to offend me??? I just don't get it though. I really don't know what you're aiming at with that one.

Wow! What erudition! What a display of intellectual prowess!

I can't tell you how much it hurts me personally to be insulted by those that don't even have the creative capacity to invent an ID, choosing instead, in all their conservative glory, to hide behind an anonymous tag...

Thank god I don't get what you've got because I'd probably get rid of it.

Is it possible for us to import some winger trolls that are actually up to the task of interacting on an intellectual level beyond "You don't have a clue LOL LOL LMAO?" I know they exist; just not here.

Wow Jay you need to relax. You're too tense, c'mon take a deep cleansing breath and maybe you'll realize that you are wasting a potentially productive life......Blah

Did you actually think I was insulted??? I thought I laid the sarcasm on pretty thick with that one...

But who's the tense one? Because you, um, seem to be going out of your way to offend me...keep trying...you are proving to be moderately humoruos...you might want to work on your insults though...they're not very good.

John K: Jaywillie needs to stop getting his political philosophy from the Star Wars movies.

Is that all you've got? Are you for real? That's all that tiny warehouse of burnt-out synapses can muster up?

John K. really needs to stop getting his political philosophy from snuff films.