Posted by Dayvoe
The Birth Certificate is REAL.

In one of the silliest stories of this silly season, more than a few wingnuts have been ranting about Senator Barack Obama's "faked" birth certificate. So far local wingnuts Mike Pintek (here and here) and John Steigerwald and of course, Quinn and Rose (note the "hat tip" in that posting and if have you have the stomach for it, listen here) have further spread this story in one form or another.

In fairness, though, Steigerwald has NOT stated that he believes it himself. He was just saying that others have raised the issue. How "Bagdhad Bob" of him.

Pintek, though, made it onto the MediaMatters.org. Good for him! Nice to see him moving up in the world. Now everyone everywhere can know how much of a wingnut he is. Here's a flash: he also thinks that that whole "global warming" thing is a hoax. How surprising.

Anyway, Factcheck.org has the evidence to clearly show that Barack Obama was, in fact, born in the US. In Hawaii. In August of 1961. After Hawaii acheived statehood. That makes Obama a natural born citizen and therefore he meets that constitutionally mandated requirement for the Presidency.

In another hit to his now defunct (as if he ever had any) credibility, smear-meister Jerome Corsi is on the record saying the certificate is "false" to Steve Doocy of Fox "News". Factcheck has a transcript:

Corsi: Well, what would be really helpful is if Senator Obama would release primary documents like his birth certificate. The campaign has a false, fake birth certificate posted on their website. How is anybody supposed to really piece together his life?

Doocy: What do you mean they have a "false birth certificate" on their Web site?
Corsi: The original birth certificate of Obama has never been released, and the campaign refuses to release it.

Doocy: Well, couldn't it just be a State of Hawaii-produced duplicate?

Corsi: No, it's a -- there's been good analysis of it on the Internet, and it's been shown to have watermarks from Photoshop. It's a fake document that's on the Web site right now, and the original birth certificate the campaign refuses to produce.

All of that, of course is bunk. Here's why. Factcheck.org actually got some first hand knowledge:

Recently FactCheck representatives got a chance to spend some time with the birth certificate, and we can attest to the fact that it is real and three-dimensional and resides at the Obama headquarters in Chicago.

They have a list of charges brought against the certificate:
Then they go point-by-point to show how each criticism is, well, complete crap. They even have art. Here's the seal. See? It's raised and everything: 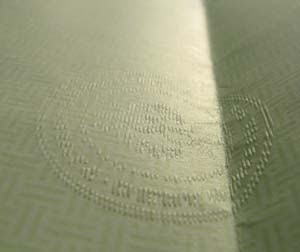 Here's the signature on the date of release: 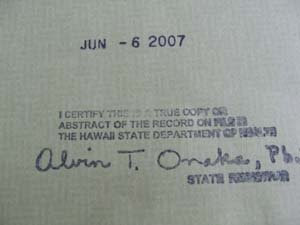 Heck someone even found the contemporaneous newspaper announcement of the birth:

Of course the wingnuts are still not convinced (and we'd trust these people to drive?). One, and presumably more - as such political deleria is contagious, writes that the newspaper announcement could still be a faked, so proves nothing.

So let's see. IF the birth certificate is a fake, then the vast conspiracy to push this fakery onto an unenlightened public must be huge - and supremely efficient (only to be thwarted utterly by one guy with photoshop, of course). As politicfact has already noted, for this certificate to be faked the conspiracy has to reach deep into:

I wonder if Mike Pintek will be issuing a correction.

John K: It is my understanding that earlier in the year when they uncovered that the Passport data base had been hacked into it was to change the data on the birth certificate.

John K: Well let's see.  Hussein Obama will not release the address of George Obama so Hannity can send him $1,000 to help him out.  And of course Edwards did extensively, with the help of the press, cover up his love child.  And we have Sen. Clinton mispeaking over and over.  And now Biden reneging on everything he said just 8 months ago.  Democrats lie.  They can't help themselves.

John K: But I always have my fall back position.  I can use the liberal line.  I didn't say it wasn't false, I said prove it. LMAO LMAO LMAO I still own you!

So, how did CNN find him then?

Americans now have a +20 view of Democrats and the Democratic Party; 57% favorable.

Americans have a -6 view of Republicans and the Republican Party; less than 50 percent favorable, more unfavorable than favorable.

I suspect that the bitter muttering, the partisan ranting, the wingnut fantasies of guys like John have something to do with this.

Keep up the good work, John.

John K: Info, the two are tied in the polls.  Obama should be way ahead.  Like 30 points ahead.  And he picked Biden. LOL LOL LOL LOL

I'm no Obama fan, so this should not be taken as a defense of his ability to win.

The fact that he's tied with McCain nationally is surely troubling for the campaign, but I doubt it's brick-shitting scary for them. The popular vote means zilch. It's the electoral college that matters, and Obama seems to still be leading in the states that he needs to win that majority.

Just for John and his dim-witted ilk, I'll repeat: the above is merely a reasonable evaluation of the statistical evidence and should not be construed as a desperate attempt to make Obama's poll numbers look better.

Of course the birth certificates check out! Of course everything *looks* proper, with all the expected seals and official signatures. After all, they have the government on their side and the government here will do anything it takes to make everything look hunky-dory.

Wait, are we talking about Obama's birth certificate, or those of the Chinese gymnastic team?

Either way, there is no way on God's green earth that Obama is a 16-year-old girl. It's time for him to hand that medal back!

From the August 23 WorldNetDaily.com article:

However, FactChecker.org [sic] says it obtained Obama's actual birth certificate and that the document was indeed real. The site discredited some of the claims of Internet bloggers, such as that the certificate as viewed in a scanned copy released by Obama's campaign lacked a raised seal. FactChecker.org also established that many of the alleged flaws in the document noted by bloggers were caused by the scanning of the document.

A separate WND investigation into Obama's birth certificate utilizing forgery experts also found the document to be authentic. The investigation also revealed methods used by some of the bloggers to determine the document was fake involved forgeries, in that a few bloggers added text and images to the certificate scan that weren't originally there.