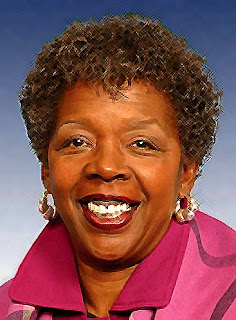 But what comes topmost to my mind with Stephanie Tubbs Jones was her passion.

She was a passionate opponent of the war in Iraq and she was also one of Hillary Clinton's strongest supporters. She consistently earned a 100 percent score on the Human Rights Campaign Congressional Scorecard and she fought hard to oppose Bush's disastrous economic policies.

And, as John Nichols at the The Nation puts it, she was a Champion of Electoral Justice:

Stephanie Tubbs Jones frequently displayed the sort of political courage that put her at odds not just with her president and his party but, at times, even with her own party.

That courage was most evident when, after the disputed 2004 presidential vote in her home state, Tubbs Jones led the House floor fight against certification of President Bush's re-election.

When critics attempted to portray the Congressional challenge to the certification of the results as an attempt to reverse the result of the 2004 election in Ohio, and by extension nationally, Tubbs Jones, explained that, "This objection does not have at its root the hope or even the hint of overturning or challenging the victory of the president." The point, said Tubbs Jones, was to expose the fundamental flaws in the current system and to highlight the need for reform.

California Senator Barbara Boxer, who joined 31 House members in objecting to the counting of Ohio's 20 electoral votes for Bush, said she was inspired by the cry for "electoral justice" raised by Tubbs Jones.

For her part, Tubbs Jones asked at the time: "How can we possibly tell millions of Americans who registered to vote, who came to the polls in record numbers... to simply get over it and move on?"

THANK YOU, Rep. Tubbs Jones for that.

Stephanie Tubbs Jones Objecting to the Certification of 2004
.

she was a great lady and a grand public servant!

There's a link for sending condolences to the family (as well as other links to local Cleveland news coverage of her life and death) on http://www.USAMediaGuide.com