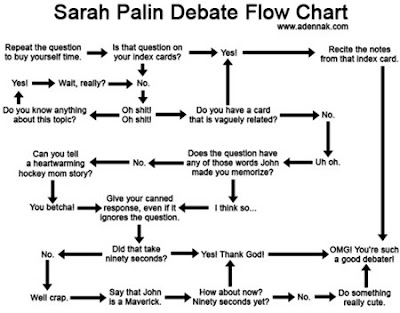 you know, i've never seen a debate, not even way back in high school where a debater was allowed to say that they weren't going to answer some of the questions.

I want to make clear that I am not the creator of this chart. You can see the original at the link.

you found it and shared it.

that is terrific in my book.

But Palin winked at the camera!

She probably really had one just like it don't you know.

Just remember that Palin's fifteen minutes is almost up. After the routing of McCain, Palin's career is over. She will go back to a very different Alaska where she has successfully burned ever bridge she built there over the past two months and probably be impeached.

The only one that looks god in this whole debacle on the Republican side was Romney; because he had enough sense not to endorse this ridiculous decision of McCain. I am no Romney fan, but got to give credit where it is due.

John K: So where was the knockout punch the great Biden was supposed to deliver? Looks to me like he is worth exactly the number of votes he got in the primary. Which is course why he failed. And of course, also why the Democrats promoted him to VP. LOL LOL

John K: That Gwen Ifill eh? Maybe we can get Olbermouth or Matthews to be the moderator in the next Presidential debate. Then all the lefties will say how fair it is.

I bet all those winks made all of the lonely male conservative wingnuts have to take cold showers, as the imagined the moose-shootin' fertility goddess herself fondling their own personal weaponry.

Did she, for example, get you hot and bothered, John K.?

Anyone read the Rich Lowry piece from National Review?

"A very wise TV executive once told me that the key to TV is projecting through the screen. It's one of the keys to the success of, say, a Bill O'Reilly, who comes through the screen and grabs you by the throat. Palin too projects through the screen like crazy. I'm sure I'm not the only male in America who, when Palin dropped her first wink, sat up a little straighter on the couch and said, "Hey, I think she just winked at me." And her smile. By the end, when she clearly knew she was doing well, it was so sparkling it was almost mesmerizing. It sent little starbursts through the screen and ricocheting around the living rooms of America"

These conservative men are hard-up for some attention.

John K: Well Jaywillie, based on the appearance of the liberal women I see, you ought to be grateful a conservative woman winked at you. LOL LOL LOL I mean, looking at them makes you want to vote conservative. LMAO

John K: Let Sarah be Sarah. It worked for Manny and the Dodgers.