Good Stuff from Peduto to do TODAY 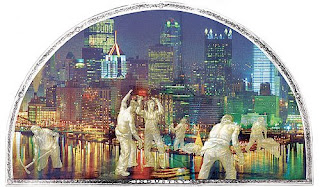 So what does the Stimulus Package mean for Pittsburgh? If you don't know, don't feel bad - you're not alone.

You may have read Bill's op-ed in the Post Gazette on how a Progressive Stimulus Plan that focuses on economic growth, housing, and infrastructure could bolster older American cities. If you haven't, take the time to read it and then join Councilman Peduto and the members and friends of Pittsburgh's CEOs for Cities for a very special and unique salon on Wednesday at 5:30 PM. The location is wherever you have your computer, the address is www.vivolive.com/pghceos4cities .

Bill has harnessed a group of federal, state and local leaders to present facts and shine light into the process. He has also recruited Vivo - a Pittsburgh-based tech firm - to showcase their new technology and give you an opportunity to do more than watch - you will have the chance to participate. This time, the revolution will be broadcast!

Let There Be Light
On Wednesday, Pittsburgh City Council will vote on a plan to create an aggressive program of replacing all of our street lights with energy-saving LED lights.

At the end of the day, I think Peduto's choice to abandon hopes of being Mayor, and instead, work around the edges, has proven to be a very good thing indeed for Pittsburgh. It gives him the freedom to work these sort of cooperative endeavors and not have the constraints of politics burdening him.

And wouldn't it be nice to be known for something OTHER than our football team? There was a time...