The Bestest Argument Ever Against Gay Marriage! 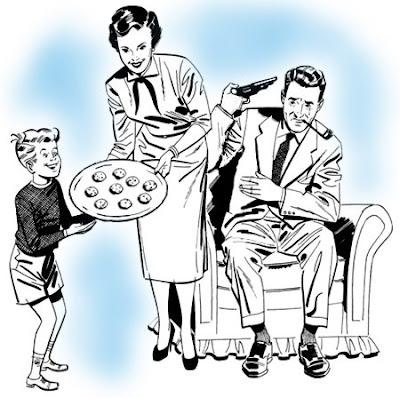 As we await today's California Supreme Court ruling on whether the state's gay marriage ban will stand, the bestest argument ever against teh gay marriage comes from Sam Schilman in the Weekly Standard. It goes like this:

When a gay man becomes a professor or a gay woman becomes a police officer, he or she performs the same job as a heterosexual. But there is a difference between a married couple and a same-sex couple in a long-term relationship. The difference is not in the nature of their relationship, not in the fact that lovemaking between men and women is, as the Catholics say, open to life. The difference is between the duties that marriage imposes on married people--not rights, but rather onerous obligations--which do not apply to same-sex love.

The relationship between a same-sex couple, though it involves the enviable joy of living forever with one's soulmate, loyalty, fidelity, warmth, a happy home, shopping, and parenting, is not the same as marriage between a man and a woman, though they enjoy exactly the same cozy virtues. These qualities are awfully nice, but they are emphatically not what marriage fosters, and, even when they do exist, are only a small part of why marriage evolved and what it does.

The fact is that marriage is part of a much larger institution, which defines the particular shape and character of marriage: the kinship system.

Consider four of the most profound effects of marriage within the kinship system.

The first is the most important: It is that marriage is concerned above all with female sexuality. The very existence of kinship depends on the protection of females from rape, degradation, and concubinage.

This most profound aspect of marriage--protecting and controlling the sexuality of the child-bearing sex--is its only true reason for being, and it has no equivalent in same-sex marriage.

Few men would ever bother to enter into a romantic heterosexual marriage--much less three, as I have done--were it not for the iron grip of necessity that falls upon us when we are unwise enough to fall in love with a woman other than our mom.

Marriage sucks for hetro men but they take up the old ball and chain because they are selfless beings who know how vital it is to society and life as we know it to control da women folk.

So get with the program!

Mr. Schilman has sacrificed his happiness and well being three times (so far) to keep the world spinning-- the least you can do is not marry once.

The author should at least get points for originality with that argument!

I thought it was a joke at first, that some corollary to Poe's Law was rearing its ugly head. Now I'm not so sure.

By the way, that picture is really distracting. If the guy is holding that gun to his own head, he has two left hands! The back of his hand should be toward the front, not his palm...that or the thumb should be on the bottom, not the top.

Thank you for enlightening us.