How The Bush Administration Supported The Troops 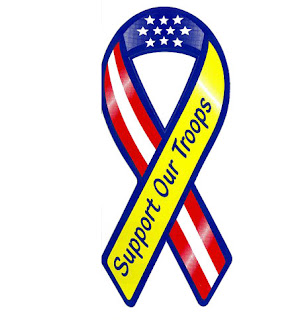 If you look around, you can still see some of those colorful "Support Our Troops" magnets that some put on their cars.

Too bad the Bush Administration didn't support the troops like they expected the rest of us to.

Stories of short supplies for American forces in Iraq, such as inadequate body armor or unshielded Hummers, have been around since the war began. CBS affiliate KHOU-TV in Houston has discovered that some soldiers were forced to ration water, perhaps as little as 2-3 liters per day, because there was never enough.

According to the report, the Army recommended 15 liters of water per day could be lost in the desert heat and these guys got as little as 2, maybe three liters.

Good thing was that it wasn't widespread:

While many soldiers have said they had adequate access to water, and even Gatorade, KHOU found that the differing experiences seemed to have a great deal to do with when and where a soldier was deployed in Iraq, and their assignment.

So early in the war, some of the boots on the ground had some harsh choices:

Army Staff Sgt. Dustin Robey told KHOU correspondent Jeremy Rogalski that soldiers would throw up or pass out from dehydration.

Chronic dehydration can lead to such problems as kidney stones, urinary infection, rectal afflictions and skin problems, and can have long-term health problems, including kidney injury.

Robey said in 2003 his company would run out of water on missions, forcing them to improvise, like drinking water from whatever taps they found.

Unfortunately, the often-untreated Iraqi water can cause intestinal illnesses. Robey said 50 to 60 members of his company got dysentery.

Any idea who was in charge of water over there in Bush's war? That's right:

The water was supposed to be processed by Houston-based company KBR.

KBR told KHOU that a Department of Defense Inspector General's report has concluded "KBR has (since) satisfied applicable water standards," adding that "the DoD has not found any illness which it attributes to water in Iraq."

Looks like they've fixed things. Tell that to Robey:

He says he's passed hundreds of kidney stones since returning form Iraq, and because of his condition the Army forced him to retire. His family is now facing foreclosure.