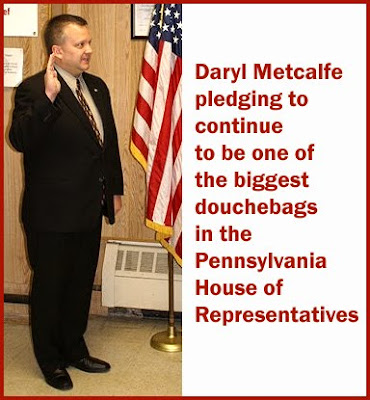 First, PA Rep. Daryl Metcalfe (R-Butler) killed a simple resolution proclaiming October as Domestic Violence Awareness Month because he said, "it has a homosexual agenda.” You can read the full resolution here. Can anyone else find anything remotely like a "homosexual agenda" within it?

Later that same day he opposed a measure to increase marriage license fees from $3 to $28 with the extra $25 to be allotted to a fund for victims of domestic abuse because he claimed that it was "a slap in the face to family values":

Rep. Darryl Metcalfe, R-Butler, expressed opposition by noting that the extra money would not flow to the state court system, but instead help the Department of Public Welfare assist victims of domestic violence.

"Asking people to pay a 700 percent increase on their marriage license fee so that domestic violence organizations across the state can access more money from the state ... is a slap in the face to family values and to individuals who actually want to enter into the institution of marriage," said Metcalfe said, according to Capitolwire.com.

This is not Metcalfe's first controversy. Last year, he raised the ire of many when before a vote on a resolution to recognize the 60th annual convention of the Ahmadiyya Muslim Community he said on the House floor, "The Muslims do not recognize Jesus Christ as God, and I will be voting negative."

This is also not the first time that Metcalfe has appeared in a post at 2pj. Back in 2005, Metcalfe was demanding that all voters present a photo ID at the polls.

But my favorite moment for this "God, Guns & Gays" Republican occurred on PCNC's Night Talk program. Metcalfe said on the show that he "chose heterosexuality." (If only the host had asked him what he was before he chose to be heterosexual...)

If you believe that there should be a vote on the resolution recognizing Domestic Violence Awareness Month and that Metcalfe should apologize for his insensitive remarks, you can take action at Keystone Progress.
.

he should be resigning but i'll bet he won't.

Why would he resign? he thinks he batting a thousand!

While I think he's a scumbag, I do have to agree that the $25 markup on a marriage license does seem to be quite a bit steep.

Well, the increase makes sense as a dedicated source of funding. If people value the institute of marriage enough to keep people out of it, seems like they should value enough to cough up a few bucks.

Please explain the connection between a fee increase and family values? It might be a slap toward family budgets, but given that most people who marry spend quite a bit on the wedding I don't buy this argument.

The line about people "who actually want to enter into the institution of marriage" is most laughable. First, survivors struggling to escape domestic violence most often want out of the institution with their lives and well-being intact. Second, count me as someone who wants in. The tax benefits alone will offset the fee increase.

This is radicalism at its best....or rather, worst.

I want to understand how someone this stupid and mean gets elected...and then I remember that George Bush was President for eight years...

Along with the increase in the license fee, we should also institute an aptitude test for all potential candidates. My guess is that Daryl would still be feverishly scribbling in his blue book while everyone else was done and gone....and we'd find out that all he'd gotten done was to scrawl out his name.....

Metcalfe keeps getting elected b/c no one will run against him. If you know anyone in Butler County start talking up this race now.
His district is basically all of Butler County.

the Other Ken said...

Ok, I have to agree with you libs on this one. I saw nothing in the resolution that "promotes a homosexual agenda." Your rep appears to be an idiotarian, you should vote his ass out.

Zach Byrnes is now running against him