Dan Stein, the president of a group called the Federation for American Immigration Reform (FAIR), whose legal wing, the Immigration Law Reform Institute, played a significant role in crafting the original Arizona "Papers, Please," bill before it was amended to include the "primary offense" language offered by Metcalfe.

Metcalfe readily acknowledged this morning that IRLI, as it's known,worked "hand-in-hand" with him to craft his bill.

Stein, however, took exception when we asked to respond to allegations made in 2007 by the Southern Poverty Law Center that FAIR is a hate group whose "key staff members have ties to white supremacist groups."

On Tuesday, PA Rep. (and Lt. Governor candidate) Daryl "I Don't Speak Mexican"* Metcalfe (R-Butler) and PA Rep. Harry Readshaw (D-Carrick and my own South Side) promoted House Bill 2479 which patterns itself after Arizona's controversial legislation and '...which would direct a police officer "to attempt to verify the immigration status of suspected illegal aliens"' and includes the ridiculous provision allowing anyone to sue police (and any official or agency) for enforcing "Federal immigration laws to less than the full extent permitted by Federal law" (Hello, Pittsburgh!)

According to a PA2010, Metcalfe’s legislative office put out a press release which stated:

Upon reading that yesterday morning, I decided to take a look at these groups and here's what I found at FIRE Coalition's website:

Senate Majority Leader Harry Reid, House Speaker Nancy Pelosi, and other Members of Congress ignore the Constitution on a daily basis, and knowingly give support and comfort to special interest groups, foreign governments and the illegal alien insurgents they encourage to invade the United States, and betray everything their oath of office represents. Ask your governor, your federal and state judges why these traitors aren’t swinging from a rope? [Emphasis added]

Swinging from a rope!?

As it so happened, I had on Pittsburgh Now with Chris Moore while I was exploring FIRE's website. Moore had Metcalfe on as a guest (via phone). So I telephoned the live call-in show and got on the air.

ME: Hello, Rep. Metcalfe. According to a press release sent to the media, you're associated with a group called the Fire Coalition. I'm reading this from their website: "Senate Majority Leader Harry Reid, House Speaker Nancy Pelosi, and other Members of Congress ignore the Constitution on a daily basis...[I truncated the quote because they don't give you much time on these shows when you call in] Ask your governor, your federal and state judges why these traitors aren’t swinging from a rope?"

Why are you associated with such a group and do you agree that Reid and Pelosi should be swinging from a rope?

ME: [Trying to talk over him] It's right on their website.

METCALFE: I've been involved for many years with these programs. I'm not sure of the validity of what you're reading.

I was cut off the call. But here's my next question for you, Rep. Metcalfe:

Why the hell aren't you sure about the validity of what I read? It took me all of 10 minutes to find it on their website! And, you say you've been associated with this group for years?

See, I do know what these groups are all about. So when I googled their name and found their website (http://firecoalition.com/), I went to their blog ("The Official FIRE Coalition Blog" linked in the upper left corner on their website) and simply searched for terms like "Obama" "traitor" and "treason" and got directed to the ugly screed written by Jeff Lewis who actually appeared at your little shindig. (You can get to it directly here or from their blog here.)

So again, I ask you, Rep. Metcalfe: Why are you associated with such a group and do you agree that Reid and Pelosi should be swinging from a rope?

And, to Rep. Readshaw -- my rep and a Democrat -- I ask you the same damn thing and I'll add: Shame on you! 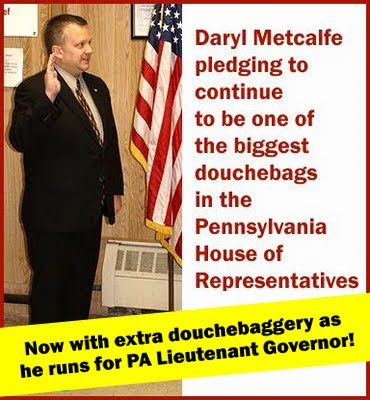 I'm familiar with Daryl's district. Believe me when I say he represents the district's views.

It would be nice to think that Moore would follow up on this as a service to his listeners.

But then, I quite watching him several years ago. I see talk shows and journalism in general as existing to ask the questions we would like to ask but can't. Sometimes, the next question to ask is obvious, as it is in your example. Moore's unwillingness to ask the obvious next question is why I stopped watching.

I understand all the stuff about not wanting to be too tough cause then you lose access. But I don't buy it. Without the tough question I might as well read the politicians website, for all the good it does me.