Corbett: Campaigning on the Public's Dime?

Posted by Maria
As the Onorato Campaign asks: "What's wrong with this picture?" 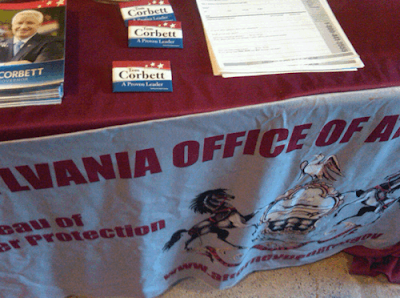 This photo was taken within the last few days at the Bradford County Fair in Troy, PA. We see what looks like a taxpayer-funded table with a banner displaying the official seal and government website of the Office of the Attorney General. On top of that table is a stack of forms from the Attorney General's Bureau of Consumer Protection - a service paid for by our tax dollars.

No problem so far.

But there's more... On top of that same table is promotional literature and buttons for Tom Corbett's campaign for Governor.

So, it's inappropriate for an elected official to use resources from their taxpayer-funded government office to promote their campaign.

And, yet, that seems to be what Tom Corbett is doing in this photo.

Sometimes reality interferes with a politician's rhetoric. And sometimes the evidence is just too plain to ignore.

Any mingling of politics and official business, however remote, is a delicate subject for Corbett, who has made his name prosecuting legislative corruption in Harrisburg through the so-called Bonusgate investigation. In that scandal, government employees were convicted, and others still stand accused, of doing campaign work on the taxpayer’s dime.

Nils Frederiksen, a spokesman for the attorney general’s office, said the materials were placed on the table before staff from the office arrived. They were immediately removed when noticed, he said. He was unsure who placed the campaign literature on the table.

"Sometimes reality interferes with a politician's rhetoric. And sometimes the evidence is just too plain to ignore."

And somehow he's doing it while steering clear of slamming him for campaigning at an official event with official staff. The kind of thing that Casablanca PA, Deweese and company always protest is "unrealistic" to expect. Interesting.

It bothers me that the person taking the photograph was careful enough to get the campaign and office materials readable and framed in one shot, but did not bother to take a photo of the staff at the booth. Why not show who was standing there? After all, that would be the really damning evidence.

On the other hand, if no one was standing at the booth, how hard would it be to grab a few Corbett fliers and snap a shot?

EVERYONE even mildly connected with politics, and I'm including dunderheads in the boonies, know that this is improper.

That said, it will be important for Onorato not to overplay his hand on stuff like this, which is, after all, a very minor transgression...

I think the "lazy workers" dustup is much more damning for Corbett, tantamount to Obama's PA gaffe which almost lost him the state. With the official unemployment figures around 10%, and the reality maybe twice that, it'll be important to get those people out to the polls....

To imply this is even in the same league as Bonusgate is nonsense.

Bonusgate was millions of tax dollars for bonuses for working on campaigns... here are a couple fliers on a table...

From your comment, I must assume you don't get out much. I've seen countless Help Wanted signs recently. One strip mall in Moon Township has 5 adjacent businesses with Help Wanted signs. Drive Rt 60 from I79 to Crafton and you will see 4-5 signs in 2 miles.

I firmly believe some do not want to work. They can make about the same, or even less, collecting unemployment that getting out of bed and showing up for work. Ooohh, the travesty.

Here's another hypothesis of mine - Some of these people cannot pass a drug test. I know my Company (which I own) insists on drug tests and many companies do so today. Too bad, Should have thought of the consequence of using drugs.

One more - tattoos. Come into apply and have visible tattoos or body piercings other than female piered ears? Bye-bye. Next.

I saw this on FB too and yacked a bit about it. But, my take is a little different (as always).

My hunch is that this State Fair Photo must have been associated with efforts to clinch a ribbon in the "silly goose competition."

The more cut-throat State Fair competition for Political Jackass ribbons (both red and blue) is still up for grabs.

CM, They can make about the same or even less on unemployment? So, the same would be good, because the government would be paying you your usual wage to do nothing. Except that it doesn't work that way, the State pays apparently about half your usual wage using a complicated formula (that only seems to matter if your salary is variable.

But the even less part, well, as we can see from what I just wrote, yeah, that's it. But how does that make unemployment more attractive than working? You're paid maybe enough to feed your family and maybe pay the rent. But unless there is more money coming into the household, then there are probably some bill that are going to pile up.

Honestly the lack of precision in your latest comments seems to indicate you have no idea what you are talking about. I guess you are not that much of an expert on financial matters after all.