Posted by Dayvoe
Jack goes there.

In this week's column, Jack Kelly shows, yet again, how he's a master of misdirection and the strawman argument. This time it's about race, the NAACP and, of course, the Obama Administration.

The race card. So useful to play when you're losing an argument. Democrats don't leave home without it.

The race card was played twice last week. At its convention in Kansas City, the National Association for the Advancement of Colored People adopted a resolution condemning the tea party as "a threat to the pursuit of human rights, justice and equality for all" because of "the racist elements" within it (according to an early draft; the final text won't be released until October).

"NAACP President Ben Jealous looks at the modern tea party movement and sees the shadow of the White Citizens Council, that gentile breed of Southerners, rife with respectability, that served as the white glove wing of the Ku Klux Klan," wrote Newsweek columnist Ellis Close after interviewing Mr. Jealous.

Let me get the remedial stuff out of the way.

The man who wrote the article Jack quotes is named Ellis COSE, not Ellis CLOSE. 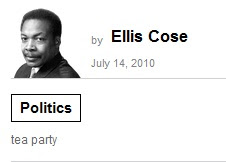 Jack, if you're going to use the man's words you really should get the man's name right. It's simple respect.

And if he writes something disagreeing with the public figure you're criticizing you should probably include that as well, doncha think? You betcha.

Cose quotes Deneen Borelli, who he describes as "a Tea Party activist from Project 21, a Washington-based black-conservative public-policy group" who asserts the Tea Party Movement is too diffuse to repudiate the nasty elements within it. Cose then writes:

Her answer is not particularly satisfying, even if you don’t believe—and I don’t—that the Tea Party belongs in the same category as the White Citizens’ Council. The council, after all, waged war on blacks, turning a blind eye to (and sometimes actively supporting) the most brutal acts imaginable. That is not what the Tea Party does. [emphasis added.]

My guess is that Jack didn't want to show any element of the lib'rul media (in this case an African-American columnist for Newsweek) disagreeing with his argument that the left is playing the "race card." But that's just a guess.

The tea party rallies have been an outpouring of public concern about runaway government spending and mammoth budget deficits. While Democrats reasonably could argue that such concern is overwrought, to claim that a racial motive underlies it is as preposterous as it is vile.

Who said anything about underlies Jack? Let's go back to Cose's column. He writes that the:

No "underlies" there. Jack set up a strawman (that the NAACP resolution asserts that the Tea Party Movement is racist) and then argues against that point. All of it misdirection.

But perhaps Cose isn't close with his characterization of the resolution. What does the NAACP itself say about the resolution? Does it, you know, quote Ben Jealous in anyway?

Goshers, I am so glad you asked. Take a look:

The resolution condemns the bigoted elements within the Tea Party and asks for them to be repudiated. The NAACP delegates presented this resolution for debate and passage after a year of vitriolic Tea Party demonstrations during which participants used racial slurs and images. In March, members of the Congressional Black Caucus were accosted by Tea Party demonstrators and called racial epithets. Civil rights icon John Lewis was spit on, while Congressman Emanuel Cleaver was called the “N” word and openly gay Congressman Barney Frank was called an ugly anti-gay slur.

“We take no issue with the Tea Party movement. We believe in freedom of assembly and people raising their voices in a democracy. What we take issue with is the Tea Party’s continued tolerance for bigotry and bigoted statements. The time has come for them to accept the responsibility that comes with influence and make clear there is no place for racism & anti-Semitism, homophobia and other forms of bigotry in their movement,” stated NAACP President and CEO Benjamin Todd Jealous. [emphasis added.]

Now go reread Jack. How silly he's made himself look.

And in the event he's forgotten the racist elements found at Tea Party rallies, here's some reminders: 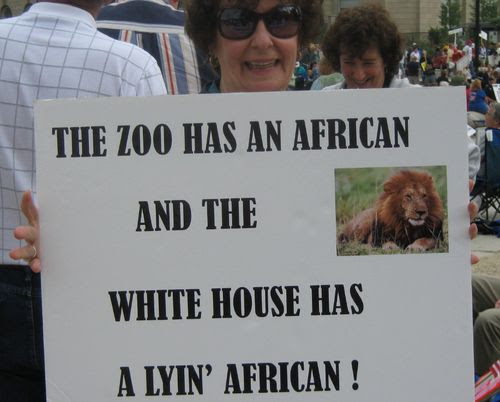 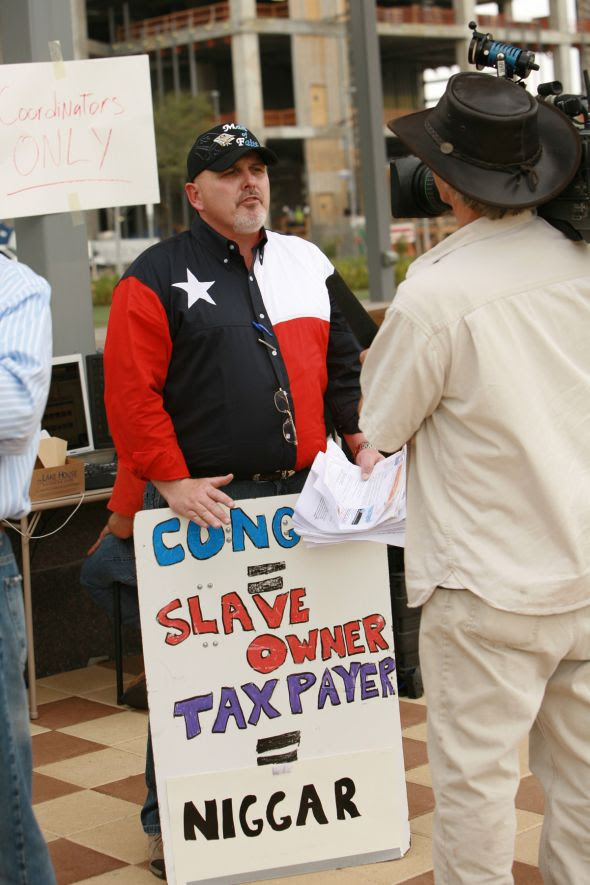 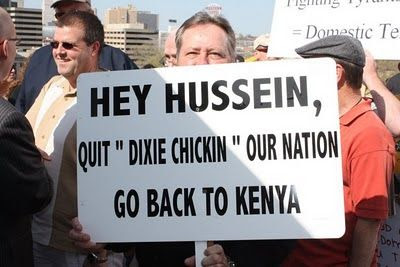 Yeppers - the Tea Party Movement is completely free of racists and racism.

Racism has always been complicated, and is still so. Obviously we have moved beyond slavery, and jails and prisons can no longer sell prisoners to corporations as slaves in all but name. But most African Americans are still trapped in poverty, and government is the only reliable entity to address that poverty. But direct aid to tide people over and long term investment like incentives for business to locate near and hire African Americans, and spending to improve urban schools, those are, I believe, the very programs the Tea Party wants to cut.

It's not surprising, though, that Kelly went there. All of the counties of Western Pennsylvania except Allegheny went for John McCain. And even in Allegheny County, most of Obama's support I suspect comes from the City and suburbs like Wikinsburg, Penn Hills, Rankin and Braddock. That's why Kelly and the Tea Party feel secure in their innuendo.

The entire region also went for hillary clinton in the primary..I voted for OBAMA and he's been a bust....Ed, I have worked in municipal gov't. I have worked alongside school district leaders and educators, the biggest myth out there is to throw more money at education.

Yes Rich, I am sure it would be better to stop throwing any money to education, kids in the inner city are better off without it. And that would not confirm the worst expectations of poor people. It would not make them think that the rich just want to make poor people more miserable.

Maybe you will get your wish, and school funding will be slashed, and you can complain about whole stupid poor people are.

Get a grip Ed, you're always going over the edge.I have a deep history of working with inner city kids in both football and baseball going back to 1980. I've worked tirelessly with non-profits groups and local gov'ts arranging after school programs, summer lunch programs and day camps.Your thoughtless sarcasm is wasted on me.I've walked the walk...you can't even do a good version of talking the talk....get REAL Ed

Rich, it is certainly a good thing that you have worked on after school, summer lunch and day camp programs. Still, let me ask this, what would teachers in inner city school districts say about school funding (I realize I am slighting rural areas here)? What do employers say about job applicants? Now I am know I am setting myself up for comments about unions and lazy public sector employees, but I still want to assert that basic public education is one of the cornerstones of addressing poverty in America. I think teachers in inner cities would ask for smaller class sizes and better materials (books, etc), all of which require more money. Instead of that, we are telling teachers that their students have to suddenly perform better on standardized tests, or the school the teacher works at will be closed.

But I guess I don't understand reality. And I guess your comment directly addressed school funding and why additional funds are *not* needed (because of the myth).

The federal Gov't returns roughly 80% of the money it takes from the states back to the states.So what the other 20% supports is a sprawling federal bureaucracy.Do we need 42 school districts in Allegheny County???School districts are just like any other body that thrives on the taxpayer...ever growing parasites.Who is going fight you the hardest on trying to cut into that number...BIG UNION.Of those 42 school districts many of them are financially distressed and so is the community.And just like in any municipal gov't..there is tons of wasted $$$$. For 50 years we've been throwing BIG $$$$ at poverty..what do we have to show for it....more poverty...and you think throwing more money at education is the way to get better students...

Rich, you are responding to my comments and questions with often unrelated sound bites. I mean, granted, blogs and comments force a fair degree of simplification, but c'mon. 42 school districts may be an impediment to helping students, or it may be a different problem. And I don't think it is "BIG UNION" that does not want consolidation of school districts, it is mostly parents in those school districts. Mt Lebonan's district wants nothing to do with Brentwood or Pittsburgh.

Once again, would students benefit from smaller class sizes and better materials?

Ed your profile states you're an educator....we we're speaking of $$$$..wasting money is relevant to the spending of it...The DOEduc skims 20% of the top,then returns it to the states. Do we need the skim? If there was less waste,then we would have the required money for "teaching materials".Just as we need municipal mergers, we need school district mergers. I was in favor of Pgh school district assuming control over the Duquesne school district.Maybe the affluent in Mt. Lebo don't care;I don't know.