The Orie Sisters: The gift that keeps on giving! 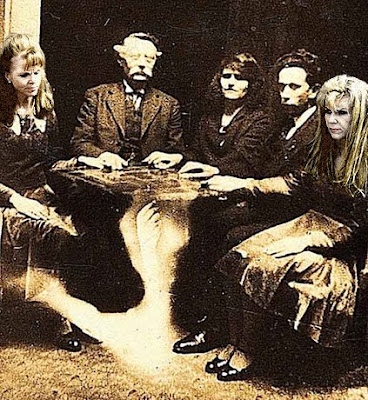 Via the Pittsburgh Post-Gazette:

State Sen. Jane Clare Orie and her sister state Supreme Court Justice Joan Orie Melvin turned to a clairvoyant to foretell the outcome of their effort to head off a grand jury investigation that ultimately snared the senator.

The other-worldly interlude involving spirits occurred in November of last year. An account of the incident is tucked deep inside a collection of affidavits entered as evidence in the case against Ms. Orie.

The "angel lady," as she was referred to in several spots, was consulted for advice about the outcome of a meeting between Robert Kramm, described by prosecutors as a political consultant with the Laborers' District Council of Western Pennsylvania, and Allegheny County District Attorney Stephen A. Zappala Jr., whose office continues to investigate the Orie sisters.

According to sources close to the case, the sisters sought advice from Carolann Sano of Philadelphia, a self-described "clairaudient," who says she can channel messages from spirit guides -- she refers to them as angels. Ms. Sano says that when she receives a question from a client, she speaks it aloud and hears the answer whispered into her right ear.

NOTE: A reminder that Sen. Orie is not running unopposed.
.

they are so frigging wierd they make the Stepford Wives look like Amish women!!!

Where did you come up with that actual family picture of the Orie's? It doesn't even look photoshopped. :-)

I have met her opponent, Dan DeMarco. He is more than qualified having spent many years serving in Ross, and he is a pretty good guy as well.

Let's just call this whole Orie thing what it is: Political retribution for Mike Veon. If the facts come out as reported in the news though, it's apples and oranges. Both wrong. But Veon... almost 2 mil in bonus on the tax payers... Ories... using the copier and the state car/driver.

Agreed Pgh_Knight that the levels may not be comparable and the motivation might have something to do with retribution (though remember that this whole thing was started by a college intern...not likely a cog in a huge conspiracy).

But what this continues to show is the sense of entitlement that so many of our elected legislators have for their own positions. This isn't about being public servants to them regardless of what they say. It's about power and position and money to them. So, so many of them succumb to this temptation.

The public should stop being shocked and fooled when these people are exposed. Charlie Rangel is another example. From the same area in the North Hills, Mike Turzai. He presents a public image of fighting for the people but his whole career (and it is his CAREER) has been about rising up thru the ranks to a leadership position. Same for the Ories. Same for Veon.

And this has nothing to do with party affiliation.

I gotta tell you, I was never in favor of term limits before. Now I think they are essential to an attempt at good government.

Remember Turzai and Orie were two of the leading forces in making sure that the City of Pgh had two oversight bodies. They were outspoken in demanding that Pittsburgh pay the price!!

Jane Orie has give back nearly $100,000 of her own pay which includes the pay raises and pension increases over the past several years, still having to pay income tax on it I might add. This was testimony by the payroll representative at the prelim trial. Wake Up Pennsylvania!! Who stands to gain if Jane Orie is out of office? It will not be the common citizen. Maybe the casino board and gaming commission have about $50 million reasons to strike down the one true representative for common taxpayer. For those who want to bash her for sending out thank you notes and using a printer....suit yourself!