Posted by Dayvoe
There's something I have to clear up.

In some of the early reporting of the Arizona shooting I read that the shooter was described as:

The gunman was young, mid-to-late 20s, white, clean-shaven with short hair and wearing dark clothing and said nothing during the shooting or while being held down, although he struggled at first. He was "not particularly well-dressed"; he didn't look like a businessman, but more of a "fringe character," [eyewitness Steven] Rayle said. The sheriff's department arrived, arrested the gunman and cordoned off the parking lot.

Then I saw the mug shot of the shooter: 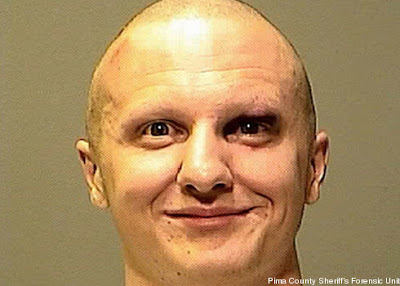 Not the most stable looking of characters, let's be honest. He just shot almost two dozen people (killing 6) and he's smiling at the camera?

I know Tom Delay smiled in his mugshot camera but that was only for money laundering. And Delay's not a killer, just corrupt republican going to jail for 3 years.

But what about this "fringe character" thing. Well, coincidentally the lovely wife and I are watching season two of the Fox show Fringe. (We're watching them in order and we haven't seen any of the current season - so NO SPOILERS PLEASE.) Anyway one of the more mysterious characters on the show are called "the observers" and they look like this: 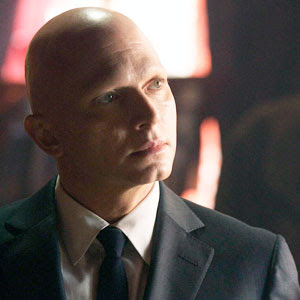 Loughner looked like "a fringe character" meaning "a character on the TV show Fringe."

Not that that means anything. 6 people are still dead. Others still wounded. Wingnuts on the right are trying to show that Sarah Palin's bullseyes are actually (giggle giggle giggle) surveyor marks. And the noise machine on the right is doing everything it can to get us all to focus on the fact that he was a lone gunman - but we all know if the guy's name was Mohammad their tune would be very different indeed.
at 1/11/2011 07:27:00 AM

You know how shooter finished his voice mail to his friend.
(giggle giggle giggle) Peace Out.
He's a anti-war truther progressive.

". . . but we all know if the guy's name was Mohammad their tune would be very different indeed."

That is a brilliant point. And well stated.