Posted by Dayvoe
The AP (and everyone else) has the story:

But not all the news is good for Camp Santorum. First (and a HUGE hat tip to Tim McNulty at the Daily Santorum) there's this from The Atlantic: 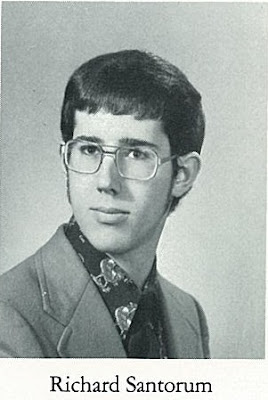 His High School Yearbook Picture
Then there's Miley. From PoliticsPA:

Even Miley Cyrus is getting in on the 2012 action. In a reaction to a recent controversy over retailer Urban Outfitters allegedly copying jewelry designs, Cryus last night aired her criticism of UO President Richard Hayne’s campaign contributions to former Senator Rick Santorum.

IF WE ALLOW GAY MARRIAGE NEXT THING U KNOW PEOPLE WILL BE MARRYING GOLD FISH’ – Rick Santorum UO contributed $13,000 to this mans campaign

Needless to say, Cyrus is not among those who are fans of Rick's anti-gay bigotry.

Cyrus has over a million followers on the social networking site, and this particular remark was re-tweeted by hundreds if not thousands of people.

So that can't be good for Rick. I am not sure how many of those million followers are old enough to vote or how many would have voted for the man with politics so vile Dan Savage named the frothy mixture after him but still it can't be good.

This guy couldn't even hold on to his seat in PA, no chance to win a nat'l election. Everyone knows he's a crazy asshole with the charisma of a damp dishrag. A damp dishrag with a bad haircut and a lecher's half-smile.

I bet O'Bama got that picture of Rickie through his 4 year extension of the Patriot Act!!

Childish.. posting the picture. But, what else would one expect from you liberals.

You don't want to argue ideas and policies on an intellectual ground.. only 'try' to be witty.. the effort of those who are intellectually deficient.

I do like some of the things he has said and stands for, though. He doesn't stand a chance, but I think his presence in the race will foster good and strong debate on certain issues.

rich, does the President extend the Patriot Act all on his own? Do you think the Republican controlled House should not have passed the extension? Do you think it should have ever been passed?

rich, Obama keeps doing things that Conservatives/Republicans really liked just a couple of years ago. And apparently you think that tweaking liberals by pointing that out is somehow being clever. I think that all it shows is that you are willing to abandon whatever principles you might have.

CM, I never see you advance ideas and policies on intellectual grounds, at best all you do is mindlessly repeat the "flavor of the quarter" Republican talking points (by the way, what happened to unemployment?). There is the matter of what you call a typo you made in the discussion of whether not to renew the Bush tax cuts. Fixing that typo (a math mistake) should have changed your argument about the effect of restoring the Clinton era taxes on the rich. Are you willing to admit that we should repeal the Bush tax cuts for those making more than $250,000 ($500,000 for married couples)? Or did you want to give us some more "typos" (also known as Republican talking points).

Do you agree with the economic writing(s) of Paul Samuelson, William Baumol, Alan Blinder? Common ground is not the latest press release of the RNC.

I seriously wish Rick Santorum would go away. The man, like Sarah Palin, is a menace. Nothing they say or do will ever convince me to vote for them.

Seriously, does Sarah Palin even think she has a chance? For God sakes, she's a QUITTER. Does anyone even remember that?

As for Rick, we all know how we feel about him. No need to continue. :-)

Eddie, that's the beauty of it...he talks outta both sides of his mouth and so do most liberal bloggers...Bush was brutalized by all liberal outlets and these local bloggers for the Patriot Act but let Obama extend it for 4 years and complete silence. Abandon principles? Oh Eddie, you're a such a pistol!!

Yeah, rich, of course only liberals lie and distort things. And also I see your point that conservatives would have to have principles in the first place to abandon them, I guess. Or were you trying to actually (as CM put it) "argue ideas and policies on an intellectual ground"?

Also of course you're right that all liberals were silent on the extension of the patriot act.

Eduardo, (practicing my Spanish) thanks for the link...still a day late....I was actually talking about the lack of local yokel blogger indignation over it. I knew I could lure you into a comment....gracias