Do you want fries with your sugar-coated Satan sandwich? 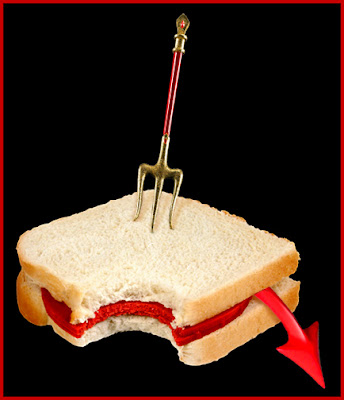 You want fries with that?
Via the examiner.com:

While the president seemed to breathe a deep sigh of relief that a deal was struck, members of the Democratic caucus were less than enthusiastic about the plan. Rep. Emanuel Cleaver dismissed the deal as “a sugar-coated Satan sandwich” and “a shady bill.”

Raúl Grijalva (D-AZ.), co-chairman of the Congressional Progressive Caucus, said, “This deal trades people’s livelihoods for the votes of a few unappeasable right-wing radicals,” adding that “the lesson today is that Republicans can hold their breath long enough to get what they want.”

Back in December the Republicans held an extension to unemployment benefits hostage until the President and Congressional Democrats caved on extended the Bush tax cuts for the wealthy (as opposed to just for the middle class). Now Obama has caved on the debt ceiling giving (as Grover Nordquist said on This Week) the Republicans everything they wanted, on their terms and on their schedule. Paul Krugman's column today (http://www.nytimes.com/2011/08/01/opinion/the-president-surrenders-on-debt-ceiling.html?_r=1&hp) is even more downbeat than Representative Grijalva. Treehugger suggests we're living in 1937 (you need to understand the reference). The Republicans have repeatedly demonstrated they are not interested in working with the Democrats to write and pass legislation, and will threaten the unemployed and even the entire country to get what they want. This is how the Tea Party defines being a real American, forcing your views on other people but exploiting and perverting the built in mechanisms design to protect us from the tyranny of the majority. Instead we have super rich and their dupes running (ruining?) the country.