Posted by Dayvoe
From Jim Morin at the Miami Herald: 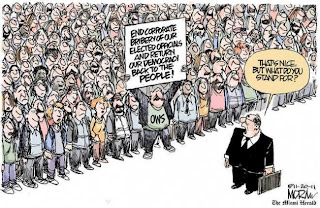 A good response even to today's Kelly column.

Where is the "PAY MY STUDENT LOANS" signs?
Since corporation are not people (except progressive non-profits and unions) I trust you now approve of warrantless searchs of corporate offices.
In what respect are "corporations not people"? (An inquiry in to lefty ignorance)

HTTT, do you really think that corporations giving unlimited money to politicians improves democracy, or can you think at all? In your link, clearly the writer does not understand the Citizens United decision. But that is par for the course of the links you post, disinformation meant to confuse issues, instead of getting at any sort of truth.

writer does not understand the Citizens United decision
I agree with this "misinformed" view and not the Keith Olbermann view that it is the New Dred Scott.
Matt Welch of Reason magazine sums up Citizens United best.
Let's boil it down to the essential words: Political documentary, banned, government.

HTTT, you think we are stupid, and you think we should continue to be stupid. Matt Welch tells us that the Citizens United decision is only about a documentary. Neither of your links mentions that corporations can now give unlimited amounts of money to politicians, which is why Congress does nothing now, and the economy is in the toilet. But then you want unemployment to stay at nine percent, and for workers to lose their health insurance.

Neither of your links mentions that corporations can now give unlimited amounts of money to politicians
Really? Directly?
Contribution Limits 2011-12

Privately held corps can piss away their resources as they wish. Public corps have stockholders and boards of directors..shareholders like to have a return on investment...so how do corps give UNLIMITED AMOUNTS?
without incurring the rath of shareholders?

Yes, shareholders (and boards of directors) exerted such sufficient control over the financial industry that it's constituent members engaged in no risky behavior that would have caused the great recession. And shareholders (and boards of directors) would never authorize record breaking bonuses to executives who lose money (or even the ones who make money). That's assuming that the stockholders who don't think that putting large sums into attack ads, travel funds, think tanks is worthwhile actually have enough stock to be able to make a difference. Or, as you point out, we are talking about one of those pesky privately owned corporations.

I'm sorry, you were talking about the alternative Republican reality, where corporations are blameless and everything is the fault of Democrats and Fannie and Freddie (which takes a million eight's worth of advice from Newt - oops, sorry, wasn't supposed to mention that).

Say what? Bribery is crime...if it occurring ...prosecute it.

Or do the corps own the justice system?

Read about the administrations of Grant, Hayes and Arthur...nothing much new in this area..we've had no success in eliminating murder, rape or robbery ...either.

If corps make decisions that cause losses .. they can go the bankruptcy route...no bail out ..

The reality is that there shud be consequences for bad business decisions....loss of share value..loss of executive position...privately held corps are a different cat..different rules...