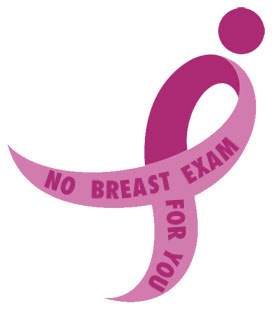 The Associated Press reports that Susan G. Komen for the Cure, the nation’s leading breast-cancer charity, will cut off its funding to Planned Parenthood affiliates, where the foundation has traditionally paid for preventive screening services.

According to the AP, the move will mean “a cutoff of hundreds of thousands of dollars in grants, mainly for breast exams.” Planned Parenthood confirms that Komen is the first, and only, organization to cut off funding since the Congress began debating the issue in earnest last winter.

Notice this was done under new guidelines that they adopted. What's also new is their senior vice president, Karen Handel, who ran for governor of Georgia on a platform of defunding Planned Parenthood.

Just another anti-choicer who doesn't really give a shit about women.

What can you do?

HTTT, where in that "Busted" article does it say Planned Parenthood does not perform mammograms? It just says that there are centers for Medicaid and Medicare patients that perform breast exams (which I believe generally means mammograms). But Republicans at the federal and state level are trying to and often succeeding in gutting Medicaid, which means you will get your wish, more women will die from breast cancer.

Oh yeah, the article also says that the state of Michigan lies to women, doesn't tell them that Planned Parenthood offers Breast Cancer exams (mammograms). Because the Republican Governor of Michigan apparently has decided to kill poor women in that state.

FYI to everyone: Breast exams and mammograms are not the same thing.

Is that breast exam for parent hood is free of cost or only rich people can avail this facility.