Rick Santorum: "The Believer" says President has a "phony theology" 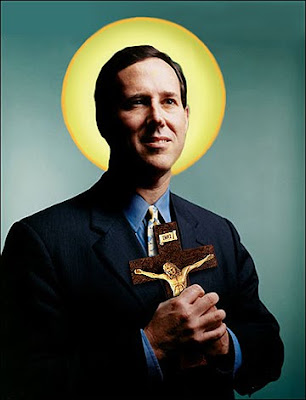 Back in 2005, the New York Times Magazine did a cover story on then Senator Santorum titled "The Believer." From that article:

Santorum is not a reader of Scripture -- ''I've never read the Bible cover to cover; maybe I should have'' -- and has no passages he clings to when seeking spiritual guidance. ''I'm a Catholic, so I'm not a biblical scholar. I'm not someone who has verses he can pop out. That's not how I interact with the faith.''

However, despite his lack of Bible training, Lil Ricky feels perfectly comfortable in criticizing President Obama's understanding of scripture and theology:

“It’s about some phony ideal, some phony theology,” Santorum said to applause from the crowd. “Oh, not a theology based on the Bible, a different theology, but no less a theology.” [...]

Although Santorum criticizes the president daily on the campaign trail, this is the first time he has used this rhetoric or said the president has a “different theology.”

Santorum has since defended his remarks on Obama and claimed that he was not questioning Obama's faith or the legitimacy of his Christianity (unlike the Christianity of all mainline Protestants?). Meanwhile, Robert Gibbs, Obama campaign strategist and former White House press secretary, rightfully called Santorum's comments “well over the line.”

Perhaps it's time for Someone to remind Lil Ricky that this election will not be decided with a puff of white smoke and that he's running for President and not Pope. 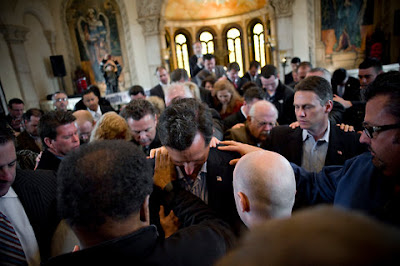 Looks like it's time for me to update this graphic I made when he was running for the Senate: 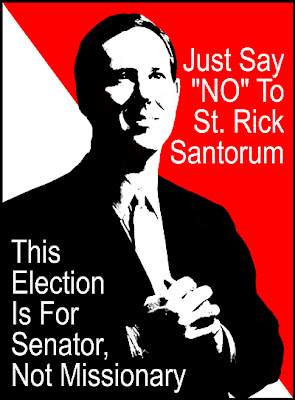 I find Christians--Evangelicals as well as those of another stripe--to be every bit as intolerant and ethnocentric as extremist Jihadists like the Taliban!

Barack Obama has either set up or allowed to continue programs that assassinate American citizens (as well as others) abroad who are suspected (but not proven in court) to be terrorists, that prosecute whistle blowers in record numbers, that prosecute marijuana growers and distributors (including state legal medical marijuana shops) in record numbers, that give virtually a free pass to the banks that wrecked our economy ... I could go on, but my point is that I have never heard a Republican/conservative give credit to Obama for how conservative he has turned out to be on so many issues. I have heard several Republicans/conservatives describe Obama as so liberal as to be a socialist.

If Obama were as liberal as conservatives like Santorum say he is, I could almost see describing his behavior as part of a "phony theology". Except that the founders placed a pretty strict limitation on how much religion can inform or dictate politics. Rick Santorum's comments insult the founders he pretends to revere.

By the way, Santorum as Catholic missionary in the Senate did a fair amount of good around the world in terms of reducing the spread and severity of AIDs. I remember the New York Times had a piece written by Bono (of U2) years ago that praised the work Santorum did do. I don't think Bono was particularly endorsing Santorum (this was well before Santorum had thought of running for President, when he was still in the Senate), or that Bono agreed with much else Santorum said/says. Just noticing that part of Santorum's Catholicism is for real. Too bad he doesn't go the whole way.

Rick Santorum is a Catholic Missionary? Oh ... and I guess George Carlin was the last Pope. Oh ... and Saddam Hussein was the Bishop of Iraq. LOL!

Santorum should read the Bible and then apologize to all his political opponents for being such a hypocrite!

Agree, agree, agree, but I don't think Frothy Mix is only targeting Obama here. I think he is implying that he has a true theology, and Romney, the Mormon is also phony.

I guess my point was too subtle. Tell me where anything I said about Obama was wrong. But, never the less, I will vote for Obama, because I think all the Republican candidates are worse. I have no reason to think any of them would not do all the negative things I mentioned, plus more (except Ron Paul, but he is a different kind of crazy).

My point was that Santorum has done a few (one or two) positive things, such that even Bono praised him for. But I don't think Bono wants to see Rick Santorum as President, and neither do I.

@Ed, why don't you cite what Santorum did in the Senate that was so good. I'm not saying he didn't- however making such a statement with no citation or explanation doesn't help promote real dialogue.

But I also think you miss the real point- that Theology is a VERY specific type of discourse, and his use of the term, what five times in a few sentences- is the issue. NOT if he did a few good things or if other people do bad things.

I agree with you that I have never heard a Republican admit to how (you say Conservative- I'd say Right Moderate) has been. Their attack on Obama isn't based in the reality of his positions, policies or actions. I don't even think they believe that. Thjey are pretty clear that they just want to defeat Obama because he is Obama.

@Unknown - What I had in mind was an editorial thingie Bono had written for the NYTimes that I read a few years ago. But I can't find it again, all I see are references to an interview with David Brooks. I think what I have seen is that Santorum backed legislation to help fight AIDS in Africa, and something about helping Chad. I have to admit, I really wonder if part of the AIDS legislation had to do with condoms, although I do remember also hearing about an (very successful) abstinence program in Uganda to fight AIDS.

I was ignoring any real points, I was making a different, rather minor point. The theology thing is interesting, I mean there is an element of truth that liberal or conservative ideology could sort of been seen as theology. But I would feel more comfortable if it were academics discussing. Rick Santorum uses the concept of theology to advance his own, to push his religion down our throats.

I pretty much agree entirely with your third paragraph. Obama is actually many things, the President who finally passed (a very weak) healthcare refrom, a President who bargained away much of the stimulus even before he (tried to) talk to the Republicans (and who actually kept a promise to try to be bipartisan), but also the guy who has not stopped the use of drones to attack terrorists, and then attack the funeral to try to get more terrorists, the President who authorized indefinite imprisonment without charges, the President who is prosecuting whistle blowers in record numbers (read Glenn Greenwald for citation). But as we are both saying, Republicans can not manage to criticize Obama for these things, because they are the same things Republicans would do if they held the White House. So Republicans make up this alternative reality, and their base eat it up.