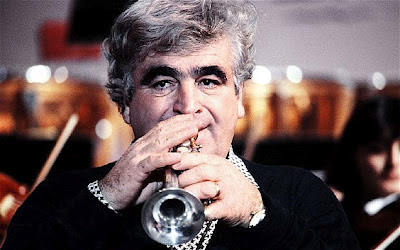 
World famous classical trumpeter Maurice Andre has died aged 78, it has been announced.

And with that, another of my heroes has passed away.

There's more from The Telegraph:

André pioneered moves into the trumpet’s higher register, exploring a range of notes that few had dared to imagine, meaning that his arrangements of works by Bach, Handel and Vivaldi incorporate passages of outstanding agility. As well as performing concertos for the instrument by Haydn and Hummel, he remodelled and recorded works for oboe, strings and even the voice on an almost industrial scale.

He went on to establish the piccolo trumpet as a mainstream instrument, demonstrating the full potential of its clear, bright ringing tone.

He's playing a picc in the above picture.  And yes, a piccolo trumpet is that tiny.  Especially in the hands of a guy as, uh, rotund as Maurice Andre.

I saw him once at Avery Fisher Hall sometime in the late 70s.  His playing was amazing, flawless, glowing, sterling, and simply perfect.

Here he is in the first movement of the second Brandenburg.  There's only a few hundred trumpet players who could get all the notes (and no, I'm not one of them) but none of them could do make it sound like this:


And here he is on a somewhat larger horn: