Posted by Dayvoe
It's a rare event when I can fill in the blanks like this on something The Trib published.  But first some context.

The Trib really really REALLY doesn't like lil Ricky.  And so it's understandable when they publish this:


Perhaps Rick Santorum was attempting to convert them.

News broke Wednesday that the Republican presidential contender and former U.S. senator from Pennsylvania made a thoughtful gesture to his Jewish supporters in South Carolina in December. His campaign sent them Hanukkah cards.

The cards were adorned with Stars of David, a pair of dreidels and the following inscription: "I am the light of the world; he who follows me will not walk in the darkness, but will have the light of life."

Where did that come from? It's from John 8:12 in the Bible's New Testament.

That's right -- the New Testament. If you need an explanation as to why that was such a hysterical faux pas, Santorum probably has a prominent position waiting for you on his campaign staff. 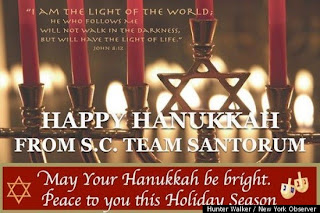 And the text from the card, in the event you can't read it:


“I am the Light of the world; he who follows Me will not walk in the darkness, but will have the Light of life.”

Funny thing, though. If you were to open up your New American Standard Bible, you'll find that the text of John 8:12 is actually:


Then Jesus again spoke to them, saying, “I am the Light of the world; he who follows Me will not walk in the darkness, but will have the Light of life.” [Emphasis added.]


But Jesus went to the Mount of Olives.  Early in the morning He came again into the temple, and all the people were coming to Him; and He sat down and began to teach them.  The scribes and the Pharisees brought a woman caught in adultery, and having set her in the center of the court, they said to Him, “Teacher, this woman has been caught in adultery, in the very act.  “Now in the Law Moses commanded us to stone such women; what then do You say?”  They were saying this, testing Him, so that they might have grounds for accusing Him. But Jesus stooped down and with His finger wrote on the ground.  But when they persisted in asking Him, He straightened up, and said to them, “He who is without sin among you, let him be the first to throw a stone at her.” Again He stooped down and wrote on the ground.  When they heard it, they began to go out one by one, beginning with the older ones, and He was left alone, and the woman, where she was, in the center of the court.  Straightening up, Jesus said to her, “Woman, where are they? Did no one condemn you?”  She said, “No one, Lord.” And Jesus said, “I do not condemn you, either. Go. From now on sin no more.”

And that's where Jesus spoke to them again.

He was speaking to the Pharisees who wanted to stone the woman for committing adultery.

Then were that not embarrassing enough for team Santorum, John 8:21 reads:

That's what Jesus said to the Jews in Chapter 8 of the Gospel According to John.  That's what the Santorum camp sent to his Jewish supporters in South Carolina - a segment of a speech where Jesus tells a group of Jews that unless they accept that he's the Messiah, they will never make it into Heaven.