The Trib And The AEI

Pretty compelling stuff, doncha think?  Until you look at some of the details.

You'll note that nowhere in the Braintrust's paragraph is there a definition of the terms "middle-class" or "lower-income" or "upper-income."  Wonder why?

For that we need to take a look at where the braintrust gets it's info.  Notably Mark J Perry of the Scaife supported AEI.  Take a look at the chart he's constructed. 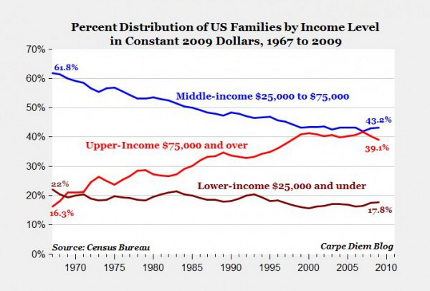 Notice anything?  He's defining "Upper-income" as anything above $75,000.  That's "the upper-income club" to the braintrust is talking about.

Second thing you'll notice is that this is Family income.  Not personal income.

Isn't it possible that between 1967 and 2009 there's been a change in family demographics?  I mean, wouldn't the move from single income to dual income shift the data just a tad?

Anything to cloud the issue of income inequality, I guess.  Especially from Scaife's braintrust and the Scaife supported AEI.
at 7/28/2013 12:08:00 PM

the income incrose year by year