The Trib And The Myth Of Global Cooling

Posted by Dayvoe
They must be getting desperate during Scaife's editorial board meetings because they pulled out an old old story today:


Post-cold wave, it's a good opportunity to remind everyone that Time magazine, in 1974, cited scientists blaming the polar vortex phenomenon on “global cooling.” It's the same Time magazine that's now blaming “global warming” for the same thing. “Honey, throw that magazine on the fire; it's getting cold outside.” [Bolding in original.]

The current "mid-70s global cooling" argument, such as it is, goes something like this: Scientists were convinced, 40 years ago, that the world was on the verge of a new ice age (the title of the Time article was, in fact, "Another Ice Age?"  It's behind a subscription wall but you can read the text here) and now they're saying the world is warming.  They can't both be right so they can't be trusted at all.  Hence we can effortlessly dismiss and/or ignore them when they show us all this data about our warming planet.

For example, this data:

Turns out the answer is no.

In 2008, the American Meteorological Society published a paper, titled, "The Myth of the 1970s Global Cooling Scientific Consensus" that begins with this:


A review of the climate science literature from 1965 to 1979 shows this myth to be false. The myth’s basis lies in a selective misreading of the texts both by some members of the media at the time and by some observers today. In fact, emphasis on greenhouse warming dominated the scientific literature even then. [Emphasis added.]

And here's how they did it:


...we conducted a rigorous literature review of the American Meteorological Society’s electronic archives as well as those of Nature and the scholarly journal archive Journal Storage (JSTOR). To capture the relevant topics, we used global temperature, global warming, and global cooling, as well as a variety of other less directly relevant search terms. Additionally, in order to make the survey more complete, even at the expense of no longer being fully reproducible by electronic search techniques, many references mentioned in the papers located by these searches were evaluated, as were references mentioned in various history-of-science documents. Because the time period attributed to the global cooling consensus is typically described as the 1970s, the literature search was limited to the period from 1965 through 1979. While no search can be 100% complete, this methodology offers a reasonable test of the hypothesis that there was a scientific consensus in the 1970s regarding the prospect of imminent global cooling. Such a consensus would be easily shown by both the presence of many articles describing global cooling projections and the absence of articles projecting global warming.

And this is what they found:

And in graph form: 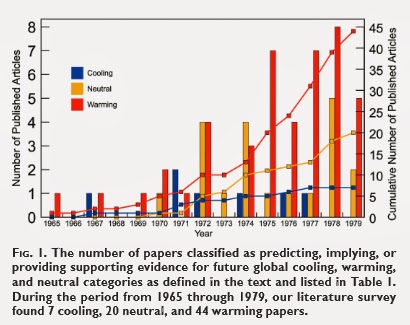 With no scientific consensus in the 1970s that the planet was cooling, all of the skeptical arguments that utilize that myth to undermine the current consensus that the planet is warming are, shall we say, less than credible.  Much less.
at 1/12/2014 09:57:00 AM

A thought provoking take: In an interview regarding "saving the planet", Bill Nye reminded us that earth isn't going anywhere. It will be here, just as it is here now, post-extinction of the other organisms that also once inhabited the place.

Our failure to give this due consideration, enables us to eventually render the place uninhabitable for ourselves. The only way to stop the madness is to recognize human existence as a matter of choice rather than some kind of gift.

Then again, if the rapture hits first, what's the difference. I don't care if it rains or freezes, I got my plastic jesus...

It doesn't matter. Liberals believe in global warming, so it must be fake!

IIRC, back in the mid-90's, polling showed that global warming/climate change was a concern shared by US citizens, regardless of political affliation. So why do so many people who self-identify as Republican/conservative now reject it? Perhaps it has something to do with where they get their news?