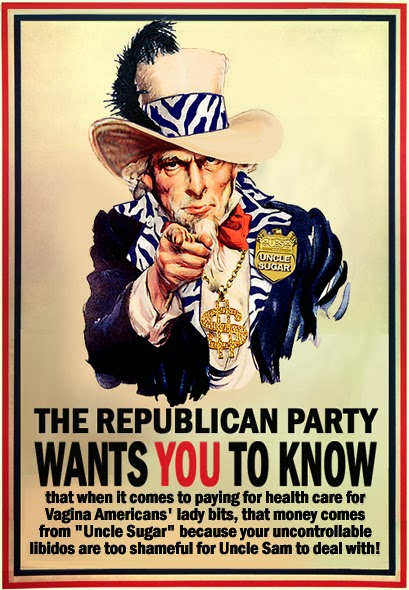 So I can say that all Democrats believe that women should be banned from carrying firearms because they are too stupid, emotional and the attacker will just take it from them.

You can say whatever you want. It doesn't make it right or true or in anyway follow from what Huckabee said or what I made from that.

If Huckabee speaks for all Republicans then these 2 speak for all Democrats
http://moelane.com/2013/03/05/evie-hudak-depravity-colorado-gun-control/

And, chances are that if you would have had a gun, then he would have been able to get that from you and possibly use it against you….”

BTW Huckabee was talking about what he thinks Democrats believe not Republicans.
http://dailycaller.com/2014/01/24/media-blames-huckabee-not-the-media-for-mix-up/
“If the Democrats want to insult the women of America by making them believe that they are helpless without Uncle Sugar coming in and providing for them a prescription each month for birth control because [DEMOCRATS BELIEVE] they cannot control their libido or their reproductive system without the help of the government, then so be it.” – Mike Huckabee

So you're comparing what some random Democratic state senator said to what a former Republican Presidential candidate said as an official speaker at the Republican National Committee's winter meeting? Apples and oranges.

Besides, at this point, these kinds of statements by Republican officials are a feature, not a bug.

"BTW Huckabee was talking about what he thinks Democrats believe not Republicans."

What he was talking was nonsense and revealed more about his own twisted attitudes towards women than anything else.

Like Wendy Davis
Evie Hudak: a ‘true champ’
Alex Wagner explains why former Colorado State Sen. Evie Hudak has shown the country that “politics at its core is about principle.”
http://www.msnbc.com/now-with-alex-wagner/watch/evie-hudak-a-true-champ-87637571592