Yes, It's Cold Out There - TODAY

Posted by Dayvoe
But the next time someone tries to tell you that "global warming stopped in 1998" or "we're in a global cooling trend" you can tell them this from the National Oceanic and Atmospheric Administration:

Or if NOAA isn't to your liking, you can always go with the slightly different analysis from the National Aeronautics and Space Administration:


NASA scientists say 2013 tied with 2009 and 2006 for the seventh warmest year since 1880, continuing a long-term trend of rising global temperatures.

Or you can show them this handy chart (thanks to thinkprogress) that plots both analyses on the same graph: 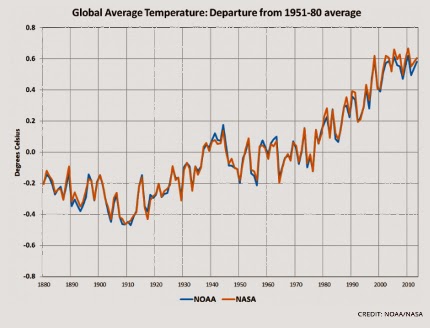 See how it moves upward?  That means that it's getting warmer.  Hasn't stopped.

The science deniers out there have two separate but interconnected problems in dealing with this reality.   Either:
Each in its own way is extraordinary, considering the mass of evidence countering it.  And as Carl Sagan once said, "Extraordinary claims require extraordinary evidence" so unless the science deniers out there have any evidence that the data is incorrect or the science is incorrect, their argument is less than meaningful.