Doesn't Anyone At The P-G Fact-Check Jack Kelly?

Posted by Dayvoe
How surprising is this?


The first five months of 2014 have been the coldest since the National Weather Service began keeping records in 1888. If “climate change” alarmists got out more, they might have noticed.

I am not really sure where he got his data, but it simply doesn't conform to the "year-to-date" data at NOAA. Here's the YTD for Jan-Apr, 2014: 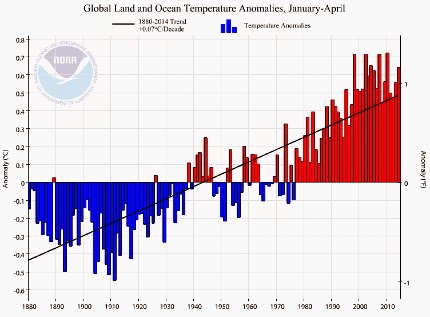 See that last red column wa-ay over on the right?  That's this past January-April.  As far as I can tell, it says that globally (and that's the only data that counts) it was about 1 degree Fahrenheit above average. See all those blue columns on the left?  Those are all the years colder than the average.

Show me where, Jack, it says that it was colder globally than 1888?

So I'm not sure where Jack got his data.  Given the extraordinary claim, shouldn't this be backed up by some sort of reference?  Where did he get this?  How does he explain how it's at odds with the expert's data?

Shouldn't this have been checked at the P-G?


Between 1979 — when weather satellites started measuring temperatures in the lower troposphere — and 1997, they rose about 1.1 degrees Celsius (1.98 degrees Fahrenheit).


In November 2005, Carl Mears and Frank Wentz at Remote Sensing Systems (RSS) performed an independent analysis of the satellite data. In the process, they found an algebraic error in the UAH [University of Alabama in Huntsville]analysis. With the correction made, the UAH trend was now 0.12°C per decade - larger but still less than the surface trend. However, RSS released their own results based on their data analysis - a trend of 0.19°C per decade.


Part of the discrepancy between UAH and RSS was the methods used to splice the data from different satellites together. However, the major source of discrepancy was the way they corrected for diurnal drift (Mears et al 2005). The satellites orbit the earth from pole to pole. The satellites possess no propulsion so slowly over time, the local equator crossing time (LECT) changes. This is exacerbated by decay of the satellites orbital height, dragged down by the thin atmosphere. As a satellite's LECT changes, it takes readings at changing local times, allowing local diurnal cycle variations to appear as spurious trends (Christy et al 2000).

So once they corrected for diurnal drift and orbital drag, in 2006, this discrepancy dissolved.

Didn't anyone at the P-G bother to check his science?

We don't need no facts around here!

We've got Faux Snooze doing our fact checking for us!

Thanks so much for exposing this charlatan.

You know what is funny, there is a new Jack Kelly column in the June 1st Sunday print edition, but as of Sunday at 2:30 it has not made it to the electronic edition. I guess Jack controls everything about his column, and for whatever reason (forgot, doesn't want to be visibly fact checked, whatever) he has not allowed it to go electronic.