Posted by Dayvoe
In yesterday's Tribune-Review, columnist Colin McNickle uses a rather old-fashioned logical fallacy in his paper's ongoing crusade to discredit the undeniable - that Climate Science is valid and the Earth is warming up due to us..

Here's what he does:


“The Arctic seems to be warming up,” wrote George Nicolas Ifft, the American consul to Norway, in a report submitted to the State Department. “Reports from fishermen, seal hunters and explorers who sail the seas ... all point to a radical change in climatic conditions and hitherto unheard of high temperatures on that part of Earth's surface.”

But this was no contemporary dispatch from a modern-day climate-clucker flapping his wings and his beak, squawking that the world as we know it will end unless the world reorders the world economy by essentially destroying the world economy to “save the world.” (Such fanatic rhetoricians typically repeat the word “world” far more times.)

No, Mr. Ifft's report was filed nearly 92 years ago, on Oct. 10, 1922. A month later, it was published in the Monthly Weather Review. And “change” hardly was framed as a pejorative. In fact, and if anything, Ifft's dispatch contains the hint of potential new business opportunities and, sorry, cluckers, intimations of the recognition of the vagaries of climate.

See that?  The arctic warmed up way back in 1922!  So all the science that says it's going on now is obviously false, right?

The only problem with this whole argument?

It was debunked 4 years ago.


Those who seek to deny global warming constantly use transparently obvious tricks, selecting data from a single time, a single place, or both, to deny the larger long-term global patterns. This is easily done as climate is constantly fluctuating, so picking out the mean patterns and trends requires that one integrates the data over the largest time and space scales possible. So if one dishonestly wants to misrepresent the larger patterns, one can always find a particular place at a particular time that does not agree with the all the rest averaged together. This is sometimes referred to as the “It’s a cold day in Wagga Wagga” approach, and is repeatedly used by the climate change deniers to fool people who haven’t looked at the data themselves. The changes in Arctic Ice are no exception!

And he specifically cites Ifft's publication:


This set of observations from a limited area (Spitzbergen) in one year has been used by deniers to suggest that there are huge natural fluctuations, and to imply that there is no global warming.

Globally however the sea temperature trend is obvious: 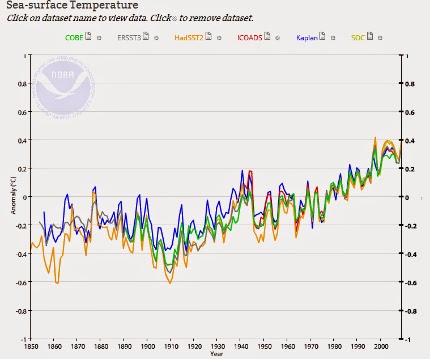 Regionally, though, there does seem to be a rise in Arctic temperatures in the 20s: 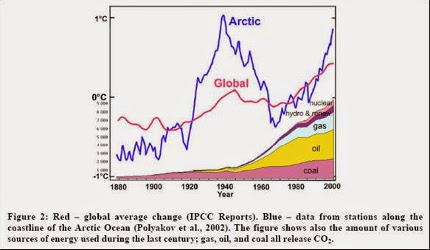 But notice what McNickle decided not to tell you.  According to the data, there was a big increase in Arctic temperature followed by a big decrease that ended sometime in the early 60s.  Then another rise (one that corresponds with a rise in the "various sources of energy used during the century" (gas, coal, oil among them).  Imagine that.

So so interesting that Colin McNickle decided not to tell you the full truth.  It's either that or he failed to fully research his topic before writing his now debunked column.  Which is it?  Incompetence or dishonesty?