Posted by Dayvoe
From Slate:


New data released Monday shows humanity has just unlocked another achievement in the race to cook the planet: The last three months were collectively the warmest ever experienced since record-keeping began in the late 1800s.

And this is the artwork from our friends in Japan: 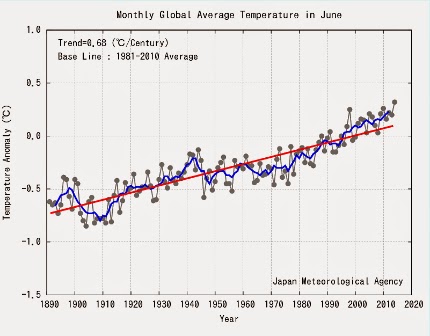 See that red line? That's the long term linear trend.  It's going up.

And then a few paragraphs later:


Also on Monday, NASA released its monthly global temperature numbers for June, with nearly identical results that were reached by a different method. According to NASA, June was the all-time third warmest, May was the warmest, and April was tied for second, with 2010 nudging out 2014 by an imperceptible 0.003 degrees Celsius in the three-month average. [Emphasis added.]

Why did I emphasize the "reached a different method" part?  If two separate studies using different methodologies both point to the same conclusion, then the chances of both being incorrect are lessened.