Posted by Dayvoe
From today's Thursday Wrap at the Tribune-Review:


More bad news for the First Church of Global Warming. The National Oceanic and Atmospheric Administration, a federal agency, mind you, reports that temperatures in the United States have not risen over the last decade. In fact, they've fallen. And that coincides with overall planetary temperature stagnation over the past 17 years, reports Rick Moran, writing in the American Thinker. Old farmers likely are making plans to put up a few extra cords of wood for the winter. [Bolding in Original.]

Sooo many misleads here.  It's a selective use of the data that brings the braintrust to this incorrect place.  Again.

We can start with the fact that they're using "temperatures in the United States" as a guide to global temperatures.  When NOAA (that same federal agency they're citing, mind you) posts this about global warming:


Temperatures measured on land and at sea for more than a century show that Earth's globally averaged surface temperature is experiencing a long-term warming trend.

They even have a chart showing the data: 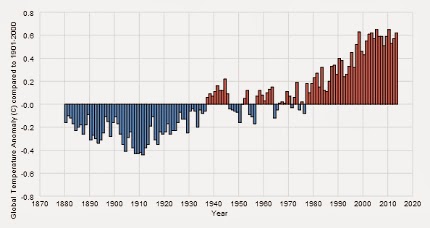 Now go back and look at what the braintrust wrote.  Notice how given the long term frame of reference their shorter terms ("the last decade" and "17 years") what they wrote can be both accurate (in the short term) and not at all true (in the long term).

If you start and end with the el Nino year of 1998 it certainly looks like a tapering off (and perhaps even a "cooling") but when taken as a whole, the localized trends become less important than the overall trend.  Which is warming.

This is a typical mislead from the science denying Trib braintrust.  It's cooler now (6:18am) than it will be 6 hours from now - does that mean the planet is cooling?  Of course not.  But that's their argument right here right now.

Not only that, but the data that the braintrust cites is for surface temperatures.  As NOAA explains:


Just because the global surface temperature has not risen significantly in the past decade doesn't mean the Earth's heat energy imbalance has vanished, though. Excess heat energy trapped by greenhouses gases can have more than one fate in the Earth system; among other things, it can cause water to evaporate, it can melt ice, and it can be mixed into the deep ocean by overturning currents.

That mixing coupled with water's naturally large heat capacity makes the global ocean the Earth’s biggest absorber of heat; scientists estimate the ocean absorbs more than 90 percent of the excess heat trapped in the atmosphere by greenhouse gases. When analyzing temperature patterns at different depths of the ocean, scientists observed that deep ocean temperatures—measured more than a half-mile down from the surface—began to rise significantly around 2000, while shallower waters warmed more slowly. This divergence took place at the same time that a natural climate cycle called the Pacific Decadal Oscillation, or PDO, was shifting to a negative phase.

So not only where they selective about the area (the contiguous USA vs the globe) in misleading you, their reading public, but they were selective in what data they used (surface temps vs water temps).

See how much do they have to mislead for their story to be accurate?

Typical. Maybe when the millions of American coastal refugees armed with guns start to flood (pun intended) their towns - they will finally no longer be able to deny - by then it will be too late anyway. That is unless we who seek the truth keep up the good fight - there is hope I hope!