Um, So WHO'S Lying? (HInt: It's The Trib Editorial Board)


On Capitol Hill, minority Democrats — who gave liberalism such a bad name that they now are forced to operate under the conscripted banner of “progressivism” — are pushing majority Republicans for higher taxes and more spending.

Never mind that the national debt of $18 trillion (yes, that's trillion with a “t”) continues to act as the world's largest Jake brake, the party of “Gimme!” wants to add the world's largest parachute to the economy — not to “save” it and make for a soft landing but to further retard it and to make ever larger its regressive footprint.

And ever Orwellian, diving deeper into taxpayer pockets and exponentially increasing spending is called an “investment.” But numbers from the Congressional Budget Office expose that “investment” as the tar pit that it is. Another decade of this kind of “progressive” spending will turn that $18 trillion debt into a $24 trillion debt, the CBO says.

Let's ignore the editorial board's partisan blather and start with the numbers.  Where did they get them?  The Braintrust says the Congressional Budget Office.

Presumably, it's this report (and a question to my braintrust friends: did you think no one was going to check or were you just hoping no one would?) and there's a summary here.

Once you read it, you'll see that the real liars are on the editorial board.


This report by the Congressional Budget Office presents an analysis of the proposals in the President’s budget request for fiscal year 2016. The analysis is based on CBO’s economic projections and estimating models (rather than on the Administration’s), and it incorporates estimates of the effects of the President’s tax proposals that were prepared by the staff of the Joint Committee on Taxation (JCT).

And this is what they do in the analysis:


In conjunction with analyzing the President’s budget, CBO has updated its baseline budget projections, which were previously issued in January 2015. Those projections largely reflect the assumption that current tax and spending laws will remain unchanged; they thereby provide a benchmark against which the President’s proposals and other potential legislation can be measured.

And they find out that:


According to CBO’s current baseline projections, under current law, the federal deficit will be $486 billion in 2015 and the cumulative deficit over the 2016–2025 period will total $7.2 trillion. The deficit is projected to be 2.7 percent of gross domestic product (GDP) in 2015, to decline to 2.4 percent of GDP in 2016 and remain at about that level for the next two years, and then to increase relative to the size of the economy, reaching 3.8 percent of GDP in 2025. [Emphasis added.]

That's if nothing changes.  If the president's budget is enacted (now pay attention, guys), this is what the CBO wrote:

So you can see where the braintrust gets it's "$24 trillion" number (start with $18 trillion add $6 trillion and you get...$24 trillion!) and you can also see the depth of their deception.

So compared to doing nothing, the president's budget would actually be reducing the debt by more than a trillion dollars, reducing the yearly deficits by billions of dollars (See the chart below) and reducing the size of the debt as a percentage of the GDP. 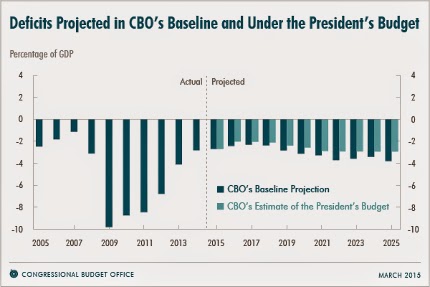 Somethings the braintrust decided its readers did not need to read.  And by doing so they're leaving their audience with an incomplete picture of reality.