The Trib, Stephanopoulos, and the Clinton Foundation (oh, and the late Mr. Scaife)

Posted by Dayvoe
From today's Tribune-Review: 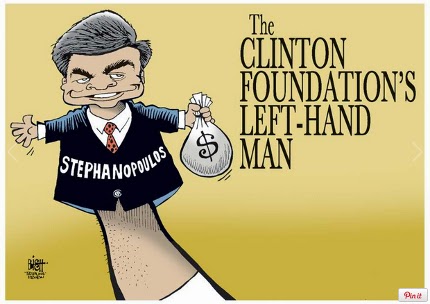 Ah, I've been waiting for this one.

I've been waiting for the day for someone at the Tribune-Review to point an ink-stained finger at the Clinton Foundation and the allegations of influence buying made by Peter Schweizer's anti-Clinton harange, "Clinton Cash."


ABC News anchor George Stephanopoulos on Thursday apologized in a statement to Politico's On Media blog for his previously undisclosed donations totaling $50,000 to the Clinton Foundation.

"I made charitable donations to the Foundation in support of the work they’re doing on global AIDS prevention and deforestation, causes I care about deeply," he said in the statement. "I thought that my contributions were a matter of public record. However, in hindsight, I should have taken the extra step of personally disclosing my donations to my employer and to the viewers on air during the recent news stories about the Foundation. I apologize."

The large donation by Stephanopoulos, who was the communications director for Bill Clinton's first presidential campaign and then was the White House communications director, was revealed a month after he interviewed the author of the book Clinton Cash, which investigated donations made to the Clinton Foundation while Democratic front-runner Hillary Clinton was working as secretary of state, on ABC's "This Week."

The point being that Stephanopolus should have let his audience know that he donated 50 large to the Clinton Foundation.

Wanna know who else gave money to the Foundation?

I'll let another Scaife-funded "news" service provide you with some of the details:


Scaife, Ruddy, and Clinton met on July 31, 2007, in the Clinton Foundation's offices in Harlem, after the former president extended an invitation. Scaife later donated more than $100,000 to the foundation.

Clinton said he was amazed that Scaife had decided not only to see him, but took a strong interest in the Clinton Foundation and its work.

I mean if Randy Bish can point that out about George Stephanopoulos, why wouldn't they want to be scrupulously honest and tell us about Scaife's Clinton Foundation even larger donations?
at 5/21/2015 10:54:00 AM

From a anti GW Bush blog.