Catherine Snow's NOT A Scientist AND She's Wrong About Climate Science

Posted by Dayvoe
This morning The Tribune-Review published yet another bit of climate science denial.  The column, however, stands out for being both written by someone new to Scaife's pages and yet still filled with the same old climate misinformation usually found in the bottom of the braintrust's thunder mug.

It is interesting to note that the writer of this climate denial is named Catherine Snow.  Perhaps she'd accept the science if her name was Catherine Heatwave or Catherine Drought.


These are challenging times for some faithful Catholics such as me. While I have utmost respect and love for our popular, approachable pontiff, I believe he has been sadly misinformed about climate change, as evidenced in his encyclical on the environment released in June.

Pope Francis is not a scientist. I do not blame him for the work's inaccuracies. Rather, I blame the Pontifical Academy of Sciences, the office responsible for advising the pope on scientific issues.

Right there, she's wrong. According to the National Catholic Reporter, the Pope is something of a scientist (though without a Master's degree as some have stated).  While he didn't graduate from a University with a chemistry degree:


What he did do was graduate with a título in chemistry from the Escuela Técnica Industrial No. 12*, which is a state-run technical secondary school.

In the Argentine system, "the título (same word used for a secondary diploma or a university degree) was earned at about age 19 after an extended secondary program," Liebscher said. "Not everyone who goes to secondary school gets one of those diplomas, and the título really represents something beyond our high-school diploma, something akin a certificate from a community college in the U.S." [Italics in Original.]

Fortunately for the Pope, the Pontifical Academy of Sciences is well-populated by actual scientists.  From the Academy's website:


Candidates for a seat in the Academy are chosen by the Academy on the basis of their eminent original scientific studies and of their acknowledged moral personality, without any ethnical or religious discrimination, and are appointed for life by sovereign act of the Holy Father.

So I'm thinking that they know a thing of two about science.  Certainly more than the admitted non-scientist Catherine Snow.

And the non-scientist Catherine Snow makes some decidedly wrong statements about climate science:


The computer models used by these climate scientists long have been predicting significant warming. But for the past 18 years, actual satellite data show no evidence of warming.

I am guessing the non-scientists Catherine Snow missed this article in the journal Science. From the editor's summary:


Previous analyses of global temperature trends during the first decade of the 21st century seemed to indicate that warming had stalled. This allowed critics of the idea of global warming to claim that concern about climate change was misplaced. Karl et al. now show that temperatures did not plateau as thought and that the supposed warming “hiatus” is just an artifact of earlier analyses. Warming has continued at a pace similar to that of the last half of the 20th century, and the slowdown was just an illusion.

Snow then goes on:


Science is not based on a consensus. It is based on empirical evidence. If a scientific theory does not match the evidence, then the theory must be abandoned or reconstructed. In other words, the models are wrong and provide no rational basis for any climate policy. 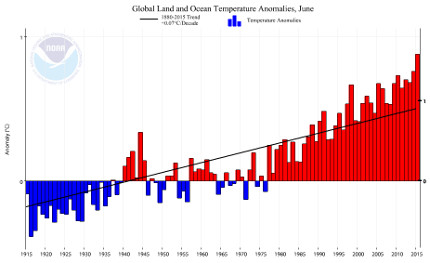 And this explanation from NOAA about why we should have confidence in the computer models.  First the math used is based on established physical laws (conservation of mass, energy and momentum and so on).  Secondly the models have been shown to be accurate with current observations and finally (and this, I'd think, is the most important):


A third source of confidence comes from the ability of mod - els to reproduce features of past climates and climate changes. Models have been used to simulate ancient climates, such as the warm mid-Holocene of 6,000 years ago or the last glacial maximum of 21,000 years ago. They can reproduce many features (allowing for uncertainties in reconstructing past climates) such as the magnitude and broad-scale pattern of oceanic cooling during the last ice age. Models can also simulate many observed aspects of climate change over the instrumental record. One example is that the global temperature trend over the past century (shown in Figure 1) can be modelled with high skill when both human and natural factors that influence climate are included. Models also reproduce other observed changes, such as the faster increase in nighttime than in daytime temperatures, the larger degree of warming in the Arctic and the small, short-term global cooling (and subsequent recovery) which has followed major volcanic eruptions, such as that of Mt. Pinatubo in 1991. Model global temperature projections made over the last two decades have also been in overall agreement with subsequent observations over that period.

This is what's known as hindcasting.  They test the model by loading it with all the data they have, say, leading up to 1950.  Then they ask the model to "predict" what will happen between 1950 and 2000.  If the "prediction" lines up with what is actually known (you know - that pesky empirical evidence) about the climate in those decades, then the model is reliable. 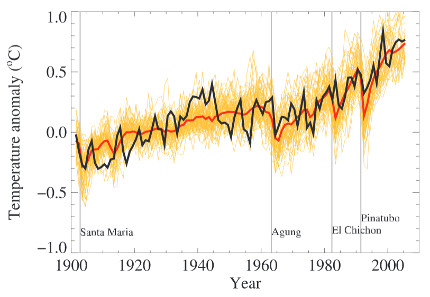 The explanation from NOAA


Global mean near-surface temperatures over the 20th century from observations (black) and as obtained from 58 simulations produced by 14 different climate models driven by both natural and human-caused factors that influence climate (yellow). The mean of all these runs is also shown (thick red line). Temperature anomalies are shown relative to the 1901 to 1950 mean. Vertical grey lines indicate the timing of major volcanic eruptions. (Figure adapted from Chapter 9, Figure 9.5. Refer to corresponding caption for further details.

Catherine, see how they all tend to go in the same direction at roughly the same time?

The models work and relying on them is the rational position.

The irrational position is to deny all that science.  It's all there, you just have to read it.