Next Time You Hear That The ACA Is A Failure

And that got our friends at Politifact researching.  They concluded that:


Even taking the low end of estimates, tens of millions of Americans have benefited from the ACA, in big ways (such as securing insurance for the first time) or smaller ways (paying less for drugs under Medicare Part D). One does not have to buy into every aspect of the law or feel comfortable with its overall price tag to acknowledge that lots of people have benefited from it. We rate Fiorina’s statement Pants on Fire.

Then there's the whole "employment" issue.  From MSNBC:


At this week’s debate for the Republican presidential candidates, Carly Fiorina, who’s dabbled at times with demonstrably false talking points, proudly declared, “Obamacare isn’t helping anyone.” Even for her, it was unsettling to hear Fiorina deny the existence of tens of millions of Americans who’ve benefited from the Affordable Care Act.

But aside from the garden-variety nonsense, the debate’s audience also heard a more specific claim from Marco Rubio: “[W]e have a crazy health care law that discourages companies from hiring people.” To which the reality-based community responded, “We do?”

The oddity of the criticism is how easy it is to recognize how wrong it is. We know, for example, that in 2014 – the first full year of ACA implementation – the job market in the United States had its best year since the late 1990s. Indeed, hiring in 2014 was so strong, it surpassed literally any single year in either Bush presidency, and even many of the years in the Clinton era. 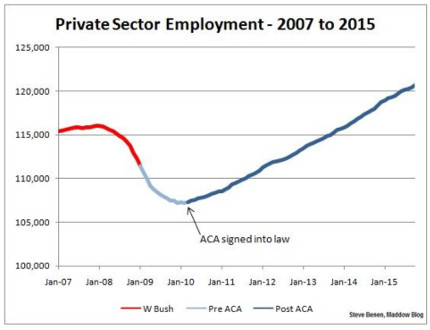 And then some context for the chart:


And why is March 2010 of particular significance? Because private-sector employment bottomed out in February 2010, and then started to recover in March 2010. It hasn’t looked back since.

March 2010 is the month President Obama signed the Affordable Care Act into law. In other words, America’s private sector started hiring again, not around the same time as “Obamacare,” but quite literally the exact month the president put pen to paper and made the ACA the law of the land.

'2014 – the first full year of ACA implementation "
Except the employer mandate.
Let me get you on Record, So you and hack Steven Benen are saying that Obamacare caused the job losses to stop.
"For the next time your crazy, right-wing, Fox-watching uncle (or cousin) starts spewing chunks about the ACA. "
Crazy, right-wing, Fox-watching uncle response:
Why does my sister with PA CHIP and Obamacare keep asking/extorting me for the $50-$60 copay to visit the doctor?
Something must be wrong, Fox News has been full on Police apologists/defenders and it is not working on me.
Except I am starting to like "Fox's favorite wingnut Wisconsin sheriff and Uncle Ruckus David Clarke" more.
http://crooksandliars.com/2015/07/foxs-wingnut-sheriff-clarke-bland-was

http://www.realclearpolitics.com/video/2015/11/10/missouri_student_vp_im_tired_of_hearing_people_use_first_amendment_rights_to_create_hostile_atmosphere.html
"I personally am tired of hearing that first amendment rights protect students when they are creating a hostile and unsafe learning environment for myself and for other students here,"