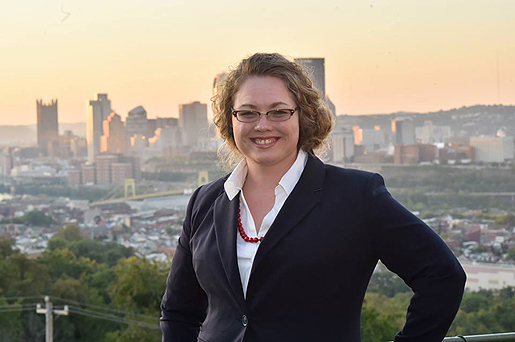 Social worker Jessica Wolfe is holding a kickoff party at her campaign headquarters in Allentown this evening. She announced yesterday that she is challenging State Rep. Jake Wheatley, Jr. who is running for an eighth term in District 19 (Hill District, North Side, South Side, Allentown, Hazelwood, Downtown,  Knoxville, Beltzhoover, Manchester, Arlington, Arlington Heights and, North, South and West Oakland).

Wolfe is not the only challenger Wheatley faces. Via Eat That, Read This:


Another of Wheatley's challengers, as the PG's Chris Potter reports, is his former staffer Aerion Abney, currently a program officer at the POISE Foundation. And a third is Mark Brentley, Sr., the former school board member who was once the sole member to vote against providing sex education to middle school students and is known for his "lengthy verbal tirades" and "anger."

Wolfe's resume includes spending the year after high school in the then newly-launched program AmeriCorps working in the warehouse of a community food bank side-by-side with volunteers which motivated her to take up social work in college. Wolfe first came to Pittsburgh to work for the 2008 Obama campaign. In addition to being a home care social worker with Allegheny Health Network, she serves on the board of the Allentown Community Development Corporation and is a two-term member of the Allegheny County Democratic Committee. Her husband, Kenneth Wolfe, previously served as a legislative aid for Wheatley.

According to the P-G, "All three challengers say Mr. Wheatley has focused on the Hill, long the district’s political center of gravity, at the expense of other areas."

Also not in Wheatley's favor is his truly awful record of missed votes in the House. He currently holds the record for the most missed votes--340 in the last five years--far above any other representative.

Wolfe's office opening is happening today from 6 PM - 9 PM at 827 East Warrington Avenue, Pittsburgh, Pa 15210. You can also go to www.jessicazwolfe.com to volunteer or donate.

I've known Ken and Jessica for a number of years now, so yes, I'm biased. But my bias is because knowing the kind of person Jessica is, I know she'd be a real asset to the House and a tireless and caring worker for her constituents.
at 1/14/2016 04:19:00 PM

Any chances of a Democrat running against Dom Costa?
http://www.legis.state.pa.us/cfdocs/legis/home/member_information/house_bio.cfm?id=1164

Opposition is great to see.