My Chat With Representative Mike Doyle

Posted by Dayvoe
A few days ago, I was lucky enough to score a few minutes of phone time with my congressional representative, Mike Doyle (PA-14). 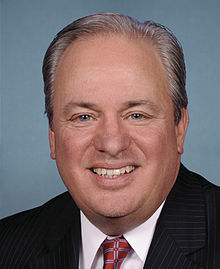 Like every other House member, he's up for re-election but I didn't want to talk to him about his race.  I wanted to talk about Donald Trump, Clinton vs Sanders, and the general state of the coming election season.

As a bit of framing, let me finally disclose my place along the Clinton/Sanders continuum.  Politically, I remain in closer agreement with Sanders than with Clinton, though Clinton would be an infinitely greater president than Donald Trump or any of the dozen and a half GOP candidates that he vanquished.

On the other hand owing to infrastructure, money, and general party politics, I was never anything but other than completely convinced that Clinton would be the Democratic nominee.

And so I didn't get involved in the very noisy fighting for a few of reasons:
Doyle, on the other hand, is a Clinton supporter.  He's a super-delegate, in fact, though he was quick to add that in the recent primary Clinton won his congressional district so voting for her not only reflects his support but his constituents' wishes as well.

When I asked him about the presidential campaign on the democratic side, he said that this point offers Senator Sanders a tremendous opportunity to help the Democratic party - OR - he could become Ralph Nader (for the millennial young'uns out there who may not recognize the name, the google machine may help).

However, were Clinton to prevail in New Jersey and/or California, she'll have an even greater delegate advantage than Sanders than she has now even if all the Clinton super-delegates in the states that he won were to switch sides and vote for him.

In the end, Doyle said, he thinks Sanders will do the right thing and make moves to unify the party behind Clinton.

As for Trump, the key word seemed to be "unpredictable" followed closely by "unstable."  Doyle used each a number of times.  For example, what was once a straight out statement about banning Muslims has now been relegated to a mere "suggestion."  Doyle said that Trump has changed his position so many times that it's difficult to see who, in fact, he really is.  And his promises about what he'll do as president only show that he doesn't exactly understand what the office is.

This is apart from Trump's promises to bring back the steel mills and raise Joe Paterno from the dead.

The Clinton/Trump race promises to have some repercussions on the statewide Senate race as well, with Clinton voters and McGinty voters being more or less the same group.  Toomey on the other hand faces the same Trump problem all other Republican candidates have - though Doyle said Toomey's straddling the fence when it comes to Trump.

In a state leaning Blueward (my term, not Doyle's - though he's free to use it if he wishes), where Clinton has a good chance to win, Toomey is at a disadvantage.

The problems facing Trump, the shifting demographics away from the white male population he does well with (he's got some serious problems with women, Hispanics and African-American voters) combined with being a "loose cannon" (Doyle's term, though it fits) mean that he's got a hard path to 270 electoral votes.  A path, it seems, that comes right through Pennsylvania.  If Trump can make advances in Pennsylvania/Ohio/Michigan he might just reach the White House.

It's the 270 that's important and on that note, we had a brief chat about some recent national polls out.

This far out, Doyle says, they're pointless.  Not only that, we don't have one national election but 51 local elections (one in each state and one in the District of Columbia).  It's how the polling data reflects who's winning in each state and then how that impacts on the distribution of each state's electoral votes that's all important.  And at this point, it's waaay to early to even make a guess.

And for that, it'll be a tough race.  Just think of all the 16 Republican opponents who Trump beat.  They got nowhere underestimating him (though Doyle giggled abit at the karma - how the billionaires looking to buy the election towards the end were faced with a choice between the two guys - Trump and Cruz - they definitely did not want).

It's going to be a tough race.

They'll all be tough races.

When Hilary Clinton wins the election running with Gun Control in the forefront (unlike Obama who ran from the Gun Control issue), it will prove that Americans are ready for common sense gun safety registration, bans and confiscation.

So claims the Democrats like Mike Doyle and their hacks at the Center for America progress and Media Matters.