Posted by Dayvoe
We're still a few days away from NOAA's monthly "State of the Climate" report for July but if the data from the Goddard Institute for Space Studies is any indication, it's still getting warmer.


Global mean temperatures in July 2016 were the warmest on record not just for July, but for any month dating to the late 1800s, according to separate just-released analyses.

NASA's Goddard Institute for Space Studies found July 2016 was the globe's warmest July in their dataset dating to 1880.

Not only that, but this same conclusion was reached elsewhere.

In Europe, the Copernicus Climate Change Service (which is run by the European Centre for Medium-Range Weather Forecasts) stated recently that:

In Japan, the story from the Japan Meteorological Agency is much the same AND they have a chart: 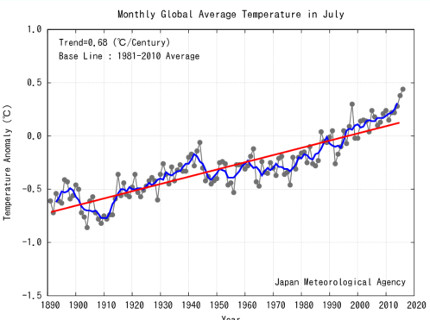 Tell me again about this Chinese Hoax of Donald Trump.

Tell me again how Pennsylvania Senator Pat Toomey isn't denying the science when he voted against the idea that "human activity significantly contributes to climate change."

Meanwhile, it's still getting warmer out there.  No question about it.

I wonder why the PA AG has not joined AGs United for Clean Power coalition?
She has the right temperament and legal ethics.
Maybe because of the witchhunt?
http://www.pagunblog.com/2016/08/15/attorney-general-convicted-on-all-charges/

Look! Over THERE! AWAY from the science!! LOOK AT ANYTING ELSE!!!