NASA, Trump, And How It's Still Getting Warmer Outside

Posted by Dayvoe
From the climate scientists at NASA:


August 2016 was the warmest August in 136 years of modern record-keeping, according to a monthly analysis of global temperatures by scientists at NASA's Goddard Institute for Space Studies (GISS) in New York.

They even have some art: 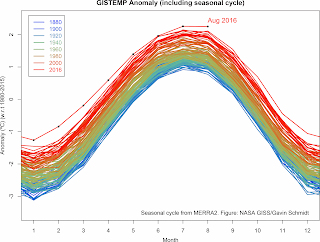 See that red line waaay up on top?  That's this year.

We already know who, in the current campaign for President is with the science (Clinton, by the way) and whose deplorable ideas have been debunked numerous times (Trump says it's a hoax).

Meanwhile, did you know that Trump's got some IRS issues?

For one thing — as The Washington Post explained Sunday — the money in the Donald J. Trump Foundation does not come from Trump himself. Tax records show that Trump hasn't donated any money to his foundation since 2008. Instead, he has retooled his personal charity so that it gives away other people's money — although Trump has kept his name on the foundation, and atop its checks.

For another, the Trump Foundation seems to have repeatedly defied the Internal Revenue Service rules that govern nonprofits. It gave a prohibited political gift to help Florida Attorney General Pamela Bondi (R). It appears to have bought items for Trump — including a $12,000 football helmet and a $20,000 portrait of Trump — despite IRS rules against "self-dealing" by charity leaders.

And, in at least five cases, the Trump Foundation may have reported making a donation that didn't seem to exist.