Questions For Representative Keith Rotfus (Did You Know He Was At That Trump Rally In Ambridge?)

Posted by Dayvoe
We'll start with his picture: 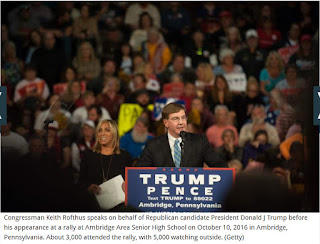 That's Representative Keith Rothfus of the Pennsylvania 12th Congressional district speaking at a Trump rally yesterday in Ambridge.  And that's a few days after the release of the now-infamous "grab them by the pussy" video.

This was two days after Rothfus tweeted this:

“I am sickened by Mr. Trump’s offensive comments. They are vile and wholly unacceptable and I strongly condemn them.
— Keith Rothfus (@KRPA12) October 8, 2016

Representative Rothfus, you do know that Trump was boasting about getting away with sexual assault, right?  That he was describing a crime, right?

If, in fact, you were "sickened" by his "offensive comments" then what were you doing in Ambridge with the little-handed pussy-grabber?

The fact that there were 8,000 Trump supporters there - 8,000 voters who you need for your reelection - can't possibly be the reason, could it?

I mean, if you want to do well in November you really can't piss off all those 8,000 Trump supporters, can you?

But what does that say to any woman in your district who might think of voting for you?  That you'd support (in one way or another) a guy who at one time felt he could grab any pussy he wanted simply because he felt like it?

"you do know that Trump was boasting about getting away with sexual assault, right?"
Name the victim of the sexual assault. Is she pressing charges. Maybe you can get Jackie Coakley of UVA to claim it was her.

Those links do not support your arguments.