We are well and truly fucked 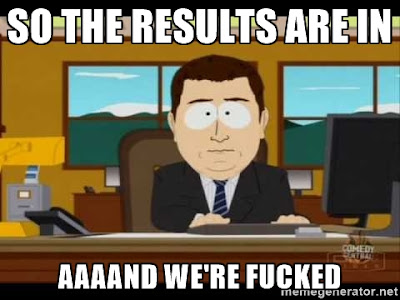 What the actual fuck?

So we now learn that the CIA confirmed that Russia wasn't just trying to undermine confidence in the election, they were actively trying to get Trump elected. Most people with half a brain could see this already, but of course, this confirmation didn't come out before the damn election.

According to the article, they secretly briefed a bipartisan group of Congressional leaders in September, but "Senate Majority Leader Mitch McConnell (R-Ky.) voiced doubts about the veracity of the intelligence, according to officials present." Well no shit he would! And now his wife has been chosen by Trump to be the next Secretary of Transportation. The motherfucker decided to put party before country. What a surprise! And, because President Obama refused to release this information without bipartisan support, it's only coming out now. (Sorry, Obama. You should have brought on the drama with this one.)

There was also that report by David Corn in Mother Jones on October 31st:


Mother Jones has reviewed that report and other memos this former spy wrote. The first memo, based on the former intelligence officer's conversations with Russian sources, noted, "Russian regime has been cultivating, supporting and assisting TRUMP for at least 5 years. Aim, endorsed by PUTIN, has been to encourage splits and divisions in western alliance." It maintained that Trump "and his inner circle have accepted a regular flow of intelligence from the Kremlin, including on his Democratic and other political rivals." It claimed that Russian intelligence had "compromised" Trump during his visits to Moscow and could "blackmail him." It also reported that Russian intelligence had compiled a dossier on Hillary Clinton based on "bugged conversations she had on various visits to Russia and intercepted phone calls."

The former intelligence officer says the response from the FBI was "shock and horror."

This was published just a couple of days after Comey's letter apprising Congress of new emails "that appear to be pertinent" to the investigation of Hillary Clinton. A letter which broke with all tradition, and the law, regarding the FBI interfering with elections. And, we know now, that while Comey had no problem slinging mud Clinton's way, the FBI and CIA were investigating Trump on far more serious matters -- like being a goddamn Manchurian Candidate!

So fuck this whole 'It's all Hillary's fault for fucking up with white working class males' meme. She had the Russians and our FBI actively fighting against her...and she knew it. And she still got 2.8 million more votes than Trump...and counting.

Fuck Мистер Trump. Fuck Mitch McConnell and the rest of the Republicans. Fuck Putin and the KGB. Fuck Comey and the FBI. And fuck the certain set of so called progressives who said it didn't matter if it was the Russians who were behind the hacked emails, it was more important that some things in those emails could hurt Bernie's feelings, and then cried 'red baiting.'

I don't even know what country this is anymore.

To use Progressive talking points
Red Baiting. McCarthyism. The 80s called they want their foreign policy back.
If Russia wanted Trump, Dayvoe's favorite magazine the Nation would have supported him.

There is more evidence for Pizzagate than for the Russian hacked the DNC.

SO, you support treason Heir?

My 2 cents: is it possible that Russia hacked emails in an attempt to influence the election? Yes... it shows the need to keep important information on a secure server and not have sloppy handling of important government documents. As far as how much it directly effects Trump, I am waiting to see if a Charlie Trie or Johnny Chung character emerges.

Now questioning the CIA/FISA courts is Traitorous?
Dayvoe better take these down.
https://2politicaljunkies.blogspot.com/search?q=senate+cia

Oh that's rich. You DO know that the intelligence community was skeptical of Curveball, don't you? And that the Bushies ignored the intel that said Iraq WASN'T developing WMD's, pushing Curveball's dubious intel to sell the war, don't you?

No, you don't. You really are that dumb.

And so the question remains? Do you support treason, Heir?

Have you no sense of decency sir, at long last? Have you left no sense of decency?
I am glad you and the authors on this blog are now on record as saying that US Government/CIA has officially released a report which contains undeniable proof that Russia behind DNC/John Podesta hacks.

"Do you support treason, Heir?"
I am glad Snowden released documents that the US Government spies on US citizens.

"You DO know that the intelligence community was skeptical of Curveball"

http://freebeacon.com/national-security/pelosi-falsely-claims-iraq-wmds/
"The first unclassified finding of the 2002 NIE stated “we judge that Iraq has continued its weapons of mass destruction (WMD) programs in defiance of UN resolutions and restrictions. Baghdad has chemical and biological weapons as well as missiles with ranges in excess of UN restrictions; if left unchecked, it probably will have a nuclear weapon during this decade.”