Posted by Dayvoe
From the climate scientists at NOAA:


The news came on a Friday evening in late April last year: The U.S. Environmental Protection Agency had removed an informational website about climate change, taking down a page that had been up, in some form, for nearly two decades and under three presidents.

Before its removal, the page had plainly stated a position on climate change: It is caused by humans, and there’s no significant doubt about that. But that position contradicted statements by the new EPA chief, Scott Pruitt, who had expressed doubts about human activity being the dominant driver of climate change.

EPA said at the time that the site had been taken down for review and that it had been archived and was still available as part of a “snapshot” of the state of the site on Jan. 19, 2017, just as the new administration took command.

This is some of the information you can find from that archived site:


In general, climate changes prior to the Industrial Revolution in the 1700s can be explained by natural causes, such as changes in solar energy, volcanic eruptions, and natural changes in greenhouse gas (GHG) concentrations.

Recent climate changes, however, cannot be explained by natural causes alone. Research indicates that natural causes do not explain most observed warming, especially warming since the mid-20th century. Rather, it is extremely likely that human activities have been the dominant cause of that warming. 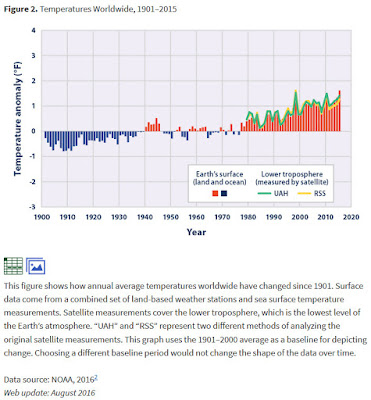 On the other hand, on the Trump-era EPA page we see this:

The text immediately below it reads:


Thank you for your interest in this topic. We are currently updating our website to reflect EPA's priorities under the leadership of President Trump and Administrator Pruitt. If you're looking for an archived version of this page, you can find it on the January 19 snapshot.

And that leads you to the year old data.

It's still getting warmer out there regardless of the efforts of the science deniers in power who are actively blocking that information from you.
at 5/20/2018 09:45:00 AM