Senator Toomey RESPONDS To Another Letter

Posted by Dayvoe
As I wrote Saturday, I received not one but two Toomey responses in the mail last week.

In fact I received another in the mail after writing yesterday's blog post - so, there's one more on the way!

The two-page Toomey response is dated June 18 and it begins this way:


Thank you for contacting me about the Iranian government, its destabilizing behavior throughout the Middle East, and its nuclear weapons program. I appreciate hearing from you.

In contrast to the letter I blogged on yesterday this one is easy. He's "responding" to (I can't say answer) this letter, the 61st.

In that letter I ask about Trump's violation of the Joint Comprehensive Plan of Action (aka "The Iran Deal"). I pointed out to Senator Toomey that he posted on his website that:


In addition to paving the way for Iran to develop nuclear weapons in a few short years, the JCPOA provided immediate sanctions relief and $100 billion to the world's leading state sponsor of terrorism.

So I asked about that. I asked:


Isn't it true that the $100 million in question is actually money from the sale of Iranian oil that the US Treasury had frozen in banks around the world? (Yes, it is.) And so aren't you (at the very least) misleading the public by using the verb "provided" rather than the more correct "returned"? It is their money, is it not? The verb "provided" seems to imply that the money was coming from someplace other than Iran itself.  [Emphases in my original blog post.]

And here's how he responded in the letter:


First, this deal released over $100 million in sanctioned Iranian oil money to the regime in Tehran almost immediately – money that the regime will use to fund increased terrorism in the region and around the world.

You'll note the very subtle rhetorical shift in his answer. In his original statement he said the $100 billion was "provided" to Iran, misleading the public by not fully explaining that the money was already Iran's - it was just frozen for a couple of decades.  After my question (and I am not implying a post hoc ergo propter hoc here, as much as I'd love to) he writes that the deal:

Which is true but, again, lacking in the necessary context to fully explain where the money initially came from (Iran).

And then I asked:


And now the agreement itself. You said that the agreement paved the way for Iran to develop nukes in a few short years. But isn't it far more accurate to say that it stopped Iran from developing those weapons that quickly? It reduced Iran's capability of producing weapons grade uranium, reduced the number of advanced centrifuges and so on.

But now with those controls off, now Iran is capable of creating a nuclear weapon much more quickly, isn't that true?

And he answered with this:

This is misleading as well. How do I know?  Take a look at this from NPR:


The deal allows Iran to continue doing just that at its Natanz facility, but the country would only be allowed to enrich uranium to no more than 3.67 percent, which is enough for civilian purposes such as power plants but is much lower than what's needed for a weapon.

Another big part of the deal is that Iran has agreed to reduce its stockpile of uranium by 98 percent.

As one U.S. administration official, who was briefing reporters on background, put it, Iran currently has 10,000 kg of enriched uranium. The country also has some additional uranium that is enriched at 20 percent.

Under this deal, Iran could keep 300 kg — enriched at no more than 3.67 percent — for the next 15 years. More than likely, Iran will get rid of what it couldn't keep by shipping it to Russia.

The bottom line: If it honors the deal, Iran would not have the kind of fissile material it needs for a nuclear bomb, but at the same time it does receive a nod from the international community that it can indeed keep a non-military nuclear program going.

See how much of the truth Toomey left out? Toomey (or his office) simply fails to point out that the "industrial scale uranium enrichment program" mentioned would not be producing any uranium at an enrichment level necessary for nuclear weapons. And no plutonium at all. But it would still exist, allowing any uninformed reader of Toomey's letter to infer , incorrectly, that Iran would still be able to make the fuel necessary to make nuclear weapons.

Sorry, Senator, but the money, the enrichment levels, the centrifuges - all dishonesty by omission.

No real need to look at the rest of the letter. But here it is, anyway: 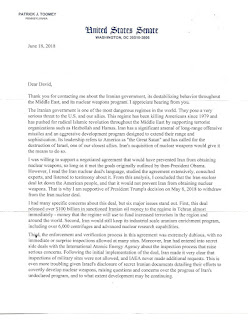 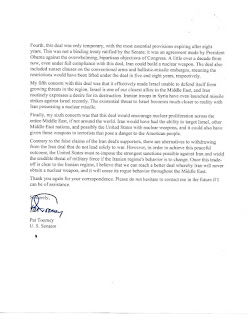 Not mentioned.
Obama Administration secretly sent Iran the money in the form of pallets of cash.