Right Wing Rally! Look Who's There!

Two (separate) astute readers each (independently) forwarded me this image this past week: 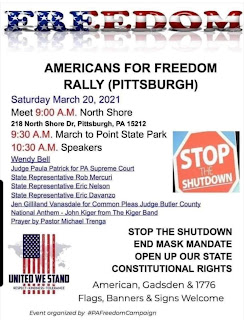 Looks like the Angel of Death will be speaking to her loving followers today. I am sure all will be masked and properly socially distanced, right? I am sure the speakers will be well-informed and responsible in dealing with complicated social issues, right?

Anyway, back to today's rally. There's been some local news pre-coverage from WPXI referencing it. The piece, by Ralph Earle, is more about a civil affairs unit of the Pittsburgh Police. The PXI piece leads us to this Facebook post: 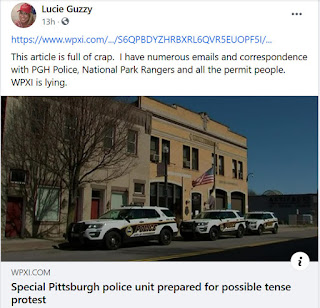 Guzzy's comments are curious because the piece includes this:

Law enforcement sources told Target 11 they are concerned that there has been little or no communication with protest organizers from last year and if those protesters return this year they are worried that could lead to problems. The organizers for the rally planned for this weekend have been in constant contact with Pittsburgh Police and obtained a permit from the city to march. [Emphasis added.]

It seems that Lucie Guzzy might have an issue with reading comprehension. Might be something she should look in to.

Katie Blackley (of WESA) is at the rally and tweeted this:

We are saving a Nation

And then the date.

Now we know what sort of rally it is.

With that in mind, let's take a look at who else is scheduled to be there:

So there'll be a prayer. That's not surprising but who's this "Pastor Michael Trenga"?

After a few minutes searching we found this Mike Trenga on twitter. On March 5, he responded to a tweet by Representative Steve Scalise:

So I'm guessing it's the same guy.

These are not patriots.

Then there's State Senator Rob Mercuri. The Pittsburgh City Paper had a piece on him a few months ago:

This month, the PA Family Council — which openly opposes same-sex marriage and supports allowing businesses to discriminate against LGBTQ people — sent out fliers in the Pittsburgh area claiming that Democratic candidates want to “push to force schools to allow boys who identify as girls to compete against girls” in youth sports.

The mailers include an image of candidate Rob Mercuri (R-Pine) who is running in the North Hills state House District 28. Next to Mercuri’s photo, the mailer reads, “Because girls deserve fairness in sports Rob Mercuri won’t change the rules.”

Mercuri doesn’t believe governments should intervene with businesses that want to discriminate against gay people. And he openly praises the endorsement he received from PA Family Council.

So when State Senator Mercuri talks about "freedom" he doesn't mean it for everyone.

Then there's State Representative Erik Nelson. There's this from Pennlive:

Declaring the results of statewide electoral contests in the 2020 general election to be in dispute, a group of House Republican lawmakers have announced their intention to introduce a resolution calling for Gov. Tom Wolf and Secretary of State Kathy Boockvar to withdraw their certification of the Nov. 3 election results in the presidential and other statewide contests.

Citing what they described as election law compromises, irregularities and improprieties associated with mail-in balloting, pre-canvassing, and canvassing, the 26 lawmakers stated in a news release issued late Friday afternoon the issues raised about the election has “undermined our elector process and as a result we can not accept certification of the results in statewide races.”

State Rep. Nelson was one of those looking to dismantle the election. So when he talks about "Constitutional Rights" he doesn't mean it for everyone.

This is the today's rally.