It’s official: I’m running for Senate here in Pennsylvania to take back the majority and stand up for America. If you believe the greatness of America is worth fighting for, join the Platoon & donate today! Together we will save the American experiment 🇺🇸 https://t.co/p5HqLd8RYM pic.twitter.com/tWkEgyWxHp 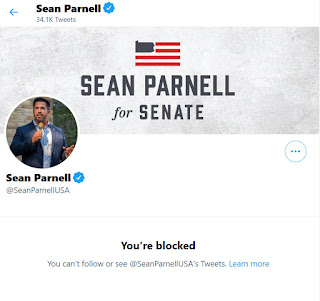 I'm a voter in Pennsylvania and Snowflake Sean blocked me from his twitter account after I asked him how he planned on making up the thousands of votes he trailed in his loss to Representative Conor Lamb.

Hey, did he ever concede that race to Rep Lamb?

Has he accepted reality and conceded that Donald Trump lost the 2020 election? He was part of the failed attempt to over turn a free and fair election, you know:

[Rep. Mike Kelly]’s legal challenge — filed along with Sean Parnell, the Republican who lost last month to 17th District Rep. Conor Lamb, D-Mt. Lebanon — is part of the broader long-shot legal strategy by President Donald Trump’s campaign and its allies to claim that his loss last month to President-elect Joe Biden was somehow illegal, illegitimate or tainted by extraordinary election measures put into place this year during the COVID-19 pandemic.

Those legal efforts have been rejected by the courts. Nearly 50 lawsuits in several states have been thrown out by judges, many of them Republicans and Trump appointees. Attorney General William Barr said this month that there was no evidence of widespread voter fraud that would change the outcome of the election, and all 50 states have certified the election results.

Does Sean Parnell still believe the Big Lie that the election was stolen from Donald Trump?

There is no honor in pushing a lie, Sean. You should know this.