Not long, if you gauge by a recent guest. Take a look:

A three percenter and an insurrectionist walk into their basements...ladies and gentlemen, it's the Wendy Bell "show". pic.twitter.com/cGe5VH6NHK

So who is this woman? This Toni Shuppe?

As we can see from Brother Jon's screen capture, she's attached to something called "Audit The Vote PA."

That's the plan that the treason-adjacent State Senator Doug Mastriano wants to implement as part of his master plan to overturn the 2020 election? get himself elected governor of PA? Both? I'm not quite sure.

Mastriano's "audit" is based on the Arizona "audit" which, not suprisingly may violate federal law:

The US Department of Justice has reviewed details that "raise concerns" about the integrity of the Republican-led audit in Maricopa County, telling the president of Arizona's state senate that the effort may violate federal law.

The audit, taking place at a sports arena in Phoenix, is being conducted by a private firm, Cyber Ninjas, that has no experience in elections and is led by a man who promoted conspiracy theories about the 2020 election. The firm was chosen to lead the effort by state Sen. Karen Fann, over the objections of Maricopa County's local Republican officials — and after two audits were already conducted last year.

On the one side of this discussion is reality and on the other is Doug Mastriano and Toni Shuppe. 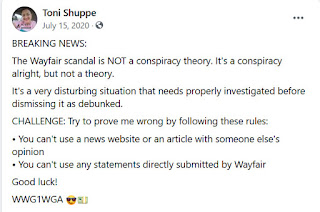 And what are the details of this "scandal" you ask? Well, the beeb has answers:

The claims originated in the QAnon community - many of whom believe in a far-right conspiracy theory that there's a secret plot by a supposed "deep state" against President Trump and his supporters.

A well-known activist tweeted about the high price of storage cabinets being sold by online retailer, Wayfair.

The user pointed out that the cabinets were "all listed with girls' names," prompting followers to allege that the pieces of furniture actually had children hidden in them as part of a supposed child trafficking ring.

BTW Toni: You have that whole "burden of proof" thing exactly backwards. YOU made the allegation that Wayfair was trafficking in girls hidden in furniture shipments so YOU have to furnish the evidence.

If you cannot (and you cannot because there isn't any) YOU have to admit that it's all bullshit.

I don't have to prove you wrong about anything.

Also, my friends, please note the WWG1WGA at the bottom of Toni's FB post. That's Q-speak for "Where We Go One, We Go All."

Recently she posted this on her FB page: 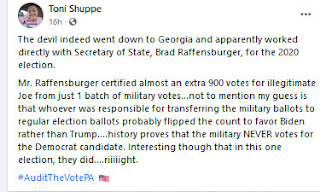 It did happen — and it's not evidence of fraud.

The 950-vote figure stems from the first hand recount of Georgia's presidential election results. It's not proof of fraud; three audits of the state's election results found no indication of widespread fraud.

And it's consistent with election workers sorting ballots as they counted, which we know was done in a Georgia recount.

"Our law enforcement officers and secretary of state's office spent literally thousands of hours examining ballots in Fulton County and other counties trying to track these kinds of claims down, and so far we've seen nothing give any merit to it," Gabriel Sterling, the Republican chief operating officer and chief financial officer for the Georgia secretary of state's office, said in an interview with CNN.

Wendy, your pal Sean Parnell once said that if you don't denounce something, you've endorsed it.