As you know Robert David Steele's Arise USA/QAnon/Anti-vaxx rally tour is having a bit of a cash flow problem.

His last regular show was in Beaver. He's now going solo. Be that as it may his next stop is up in Belfast, Maine.

And here's a response from some citizens of Maine:

Congregation Beth Israel, within its membership, contains a wide-range of political views.
One thing we all agree on, regardless of our individual politics, is a definition of anti-Semitism.
Tomorrow night in Belfast, which is home to some Jewish members and friends of our congregation, Representative Heidi Sampson will speak at an event organized by Robert David Steele. The Bangor Daily News article below lists him as an anti-Zionist, but he has repeatedly expressed anti-Semitic views and praise for Holocaust denial in the past.

We hold that it is utterly repugnant and irresponsible for Representative Sampson to participate in anything organized by such an anti-Semite.

So what's my question? It's based on this screen capture: 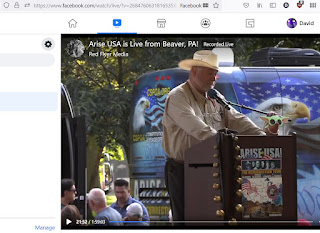 That's Robert David Steele in the cowboy hat behind the podium.

And who's that behind the stage, schmoozing with some prospective voters?

By gum, that's Senate Candidate Sean Parnell! He even posted a  picture of the event at his own Facebook page!

Did he know about Steele's antisemitism? Can you explain your presence at the Arise USA/QAnon/Anti-vaxx rally in Beaver?

Sean once (famously) said that if you don't denounce something, you've embraced it.

Ok, Sean. Do you denounce Robert David Steele's antisemitism? How about the anti-vaxx misinformation spread at that rally?

While I am not a member of Pennsylvania Republican Party, I am guessing that more than a few members might want an answer to these questions.